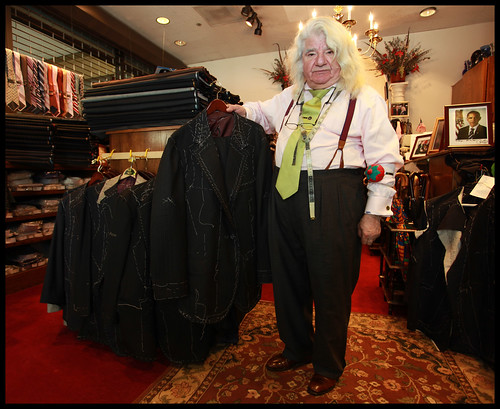 “I come from France. I’ve been a tailor since I was 14 years old. My family wanted me to be a lawyer, my father was a supreme court justice, but I wanted to be a tailor. My sister is a lawyer, though.

“I’ve been in DC for 50 years and opened this shop in 1982. A lady brought me here to DC. She was French-American, but it didn’t work out. After that, things were difficult. You know, I became homeless. I lived on the street at 14th and K St, NW, for a number of months. But things turned around.

“In my time here, I’ve seen a lot of people, a lot of personalities, come through this door: presidents, senators, some poor people and some rich people. First president I worked with was Lyndon Johnson. I was recommended to him when he was vice-president and I made some alterations for him. When he became president, I still did his suits. Presidents I go to see, but senators and Cabinet secretaries, they come to me. But the president, you have to go to the White House! Now, I do suits for President Obama and Vice President Biden. They’re all very nice people.

“The presidents all come to me because of my style, the presidential or ambassador style as I like to call it. The thing that is distinctive about my suits is the perfection. The details. Remember when people thought that President Bush was wearing a radio receiver  when he debated John Kerry? That was my suit the president was wearing! He was not wearing a receiver, but a bulletproof vest that no one told me about before when I was making alterations. Instead of telling people the truth, the secret service tried to blame me, the tailor. But, I tell you, my work is perfect.

“In my sixty years in the business, I don’t believe that a gentleman should change his style. He should change suits, but not the style. Some people ask me why I don’t update my style and be more for today? To them I say, look, you can wear whatever you want, you can wear blue jeans, but I prefer classic and conservative. I’ve always been like this. Even when I do my laundry, I wear slacks.

“To me, working with the presidents doesn’t feel like a big deal, but when I walk around people say, ‘Hey, that’s Georges de Paris, the tailor for the presidents!’ One time, I was trying to get a drink from a bartender and someone pointed me out as being the tailor to the president. The bartender looked at me and said, “Come on, man, go back to your country. You’re a liar.’ I said, ‘Ok, I’ll go back to my country, but let me get a drink first.'”

Read more about Georges de Paris in The New York Times and NPR.