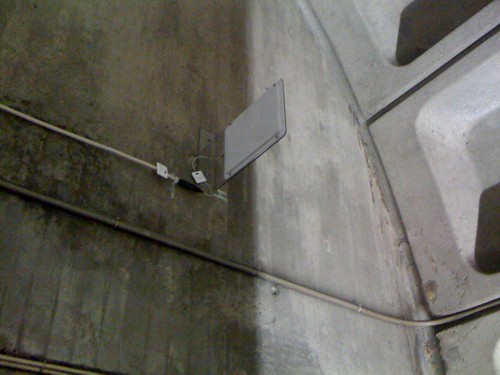 I’ve seen workers installing the wires and transmitters for the new wireless services in the Columbia Heights and a few other stations the last month, but wondering if anyone has details on whether WMATA is still on target to get the 20 Metro stations in the press release below connected by Oct 16th as promised?

The reader sent in the photo above from the Crystal City Station. I was going to ask readers if they’ve noticed service in any stations yet, but being that the DC blogosphere can be very small world at times – DCist explored the same issue earlier on Thurs. They said they were able to get service at L’Enfant Plaza. Anyone else getting service at stations already?

I’ll be honest – I’m of the old school that sorta prefers the minimal times when I’m not connected. God help us when folks can use their cells on airplanes…

So what about you – do you even want cell phone service within the metro? I can appreciate being able to check email and the web but I’m kinda dreading dozens of phone conversations. Am I just being ornery or is cell service at metro stations and inevitably on the trains themselves a good thing?