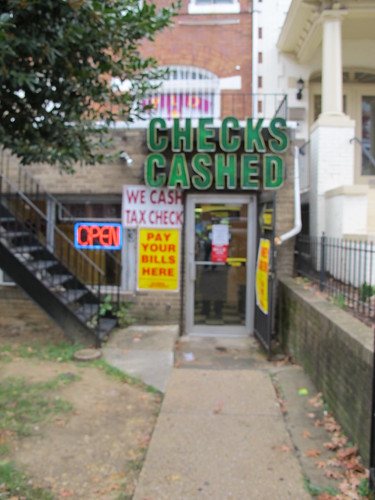 This is something that’s been on my mind a while and in a previous post about a CVS coming to Petworth, someone mentioned that they’d like to see a bank branch as well. I have to echo that sentiment. It’s always (and I’ve noted it before) bothered me that the Petworth (and U St) metro doesn’t have a Chevy Chase ATM when so many other stops have them. Then it got me thinking that there really aren’t many banking options near where I live in Petworth (yes there is one further south in Park View). So my folks were here this past weekend and my Dad mentioned that it was often quite common for banks to neglect lower income neighborhoods. And of course we have plenty of “Checks Cashed” spots. I know they are useful to some folks but they really bother me just like the damn Cash Point commercials. I believe the “Checks Cashed” stores take a decent percentage every time you cash a check. But do regular hard working residents also not deserve a proper bank where a percentage of their check will not be removed every time they/we cash one? I’m not saying I want a bank on every single corner (nor do I want a CVS on every corner) but it does seem like a glaring omission in many neighborhoods considered lower income. Am I reading too much into this?

More Stories
An Odd CombinationAnyone Know What Happened at McPherson Square This Morning?