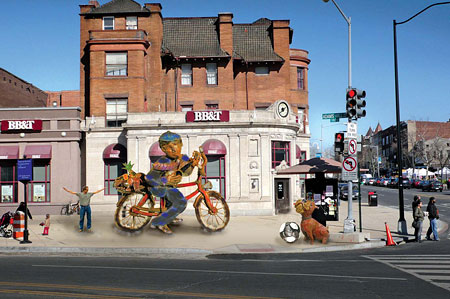 Back in June it was leaked to me that the Bike Musician sculpture had been selected for the Adams Morgan plaza at Columbia Road and 18th. At that time the Deirdre Thayer Ehlen, DC Creates Public Art Coordinator, denied that a sculpture had been selected. Well, now Greater Greater Washington confirms that the DC Commission on the Arts and Humanities has indeed selected the Bike Musician. You can see what the other options were here. It’s funny, at the time, I disliked the Bike Musician. But to tell you the truth it has sorta grown on me. I guess it’s a bit hard to envision what it’ll look like life size. But I think a bit of quirkiness may turn out alright.

UPDATE:  Allright, lemons into lemonade as they say.  So what the hell is the purpose of the DC Commission on the Arts?  I mean if they vote on a project and then table it (see comments), what’s the point?  If the Vietnam Memorial selection operated this way, I doubt it ever would’ve been built.  Obviously this doesn’t hold the gravitas of the Vietnam Memorial, but tell me what is the point of the Arts Commission?  Should it still exist as is?  Should it be an elected position?  What should the public/community role be in selecting a neighborhood art project like this?

more stories
Previous
He Testified
Next
Dear PoP – Can We Use Harriet Tubman Turf Field?