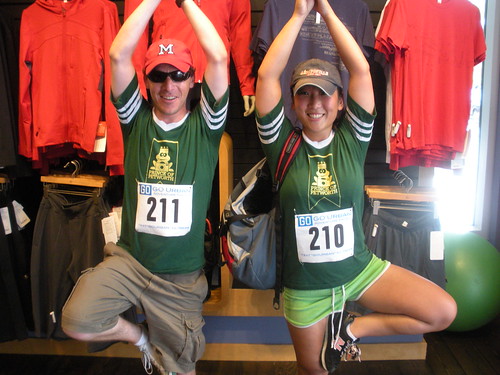 Ed. Note: Kalia wrote about the race on July 20th. She is also way too kind in this write up. She was a far tougher competitor than I was.

So I’m sure many of you read last week how awesome the GO Urban Adventure Race was going to be, but now you can hear how awesome it actually was!!! For those of you who signed up and participated I hope you had as great an adventure as PoP and I did. For those of you who thought about it and didn’t get around to it, I hope you will reconsider when next year comes around.

PoP and I arrived a bit early, sorry about that PoP, which gave us a chance to sit back and watch all of our competition arrive team by team. The competition was pretty mixed from very competitive to easy-breezy-they-got-nothing-on-us. Some people wore camel backs and some wore cut off jeans. One team showed up sporting suit vests and cut off dress pants-AWESOME!!! Check in was quick and easy. We were also given our pin on race numbers (just like if we were in a marathon) goody bags with cool stuff from GO Urban as well as from their sponsors and we checked our phone to make sure it had proper textability with their system.

Exactly at noon everyone received their first 4 clues via text and off we went! PoP and I decided to head to Dupont Circle first so we hoofed it up to our first few locations. The texting was a great way to get the clues and man did those clues send us EVERYWHERE!!! We decided to jog/walk everywhere forgoing the use of the metro trains and buses. We are hardcore! ;) Ok well PoP is hardcore; I just want to throw that out there. For those of you who imagine PoP leisurely strolling along on the weekends snapping photos, you are grossly mistaken. PoP walks at an inhuman speed which had me jogging slowly beside him. I can only imagine what the people we passed by thought at the sight of us. Our adventure took us from George Washington to Dupont, from Dupont to the Mall, then on down around the Tidal Basin to see old TJ and back up around to the WWII memorial. It then sent us up to the Farragut N. metro area and oops, back down to the National Aquarium, and ah, crap, back up to Dupont circle because we finally figured out what those clues meant! There were 2 points in Old Town Alexandria which PoP and I decided to not do, so we hoofed it from Dupont back to GW and we were the 7th team to arrive, but the 1st to arrive with all 10 DC points out the total 12. There were some major delays and break downs on the blue line that day so we were thankful we decided not to even bother going. Due to this the GO Urban team decided to let all 50 teams qualify for free to the Championship race July 17, 2010 in DC!!! Continues after the jump.

After, covering about 16 miles in 4.5 hours and unofficially declaring ourselves the winners we headed home. We were too exhausted to stick around for the lamp lighting ceremony but I’m sure it was fantastic as well. The GO Urban team members were extremely nice and helpful throughout the entire race. They were at many of the destination points taking pictures and video footage as well as cheering everyone on. It was a great workout and to be honest the furthest I have ever travelled on foot before in my life. I was sore to the bone and tired as all hell, but I would do it all over again a thousand times again! I don’t care how lame this sounds but after accomplishing something like that I feel badass!!!!!!! If you want to get a chance to try to make it to the championship you can still sign up for the other locations across the country. DO IT!!!

Oh and just for fun, here are some of the clues we had: (the txt part is the directions to us as to what we had to text back to GO Urban to get the next clue. The Pix part is what we had to take a picture of when we were at the site)

“Kilroy was here” txt: combine the 1st 3 letters of each word on the 9th, 7th, and 1st pillars clockwise from southern arch. Pix: take a picture with Kilroy

more stories
Previous
Great for Trees or Mosquitos? by Eric Nuzum
Next
House of the Day