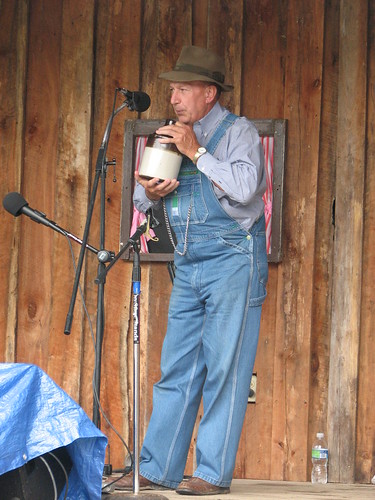 The following was written by PoP contributor, Charles

You don’t actually have to be much of a bluegrass fan to really like bluegrass festivals. Half the fun is putting as much psychic distance between yourself and the city as seems possible without a plane ticket or a passport. Pitching a tent on the banks of Shavers Fork and watching bluegrass on a hand-built stage, surrounded by green mountains and the sort of people who find your DC plates exotic enough to start up a conversation does that quite nicely.

But the music is pretty good, too. I am no bluegrass expert, but one of the most memorable musical moment I’ve ever had came a couple of years back at “Li’L Margaret’s Bluegrass and Old Time Music Festival” when a heavy-set blind guy named Michael Cleveland threw down against a skinny kid called Patrick McAvinue and they tore the place up with just a couple of fiddles and a stand-up mic.

We didn’t see anything quite that astounding last weekend, at the “Pickin’ in Parsons (West Virginia) Celebration of Bluegrass and Hillbilly Music,” but we caught most of the 15 acts that played over three days and barely heard a bad note. Every now and then one of the better known acts, like Rhonda Vincent & The Rage or Randy Waller and the (next generation of, apparently) Country Gentlemen seemed a little slick. But the music was fun and heartfelt and occasionally brilliant, in a setting that’s the mountaineer equivalent of the smoky bar where you caught Nirvana just before Nevermind came out. 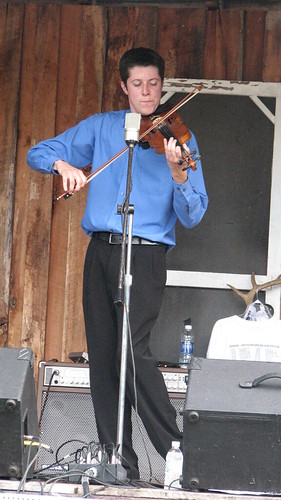 It’s mostly the music, but it’s not just the music. Apparently there’s redneck Borscht Belt, also in the mountains but several hundred miles south of the Catskills, and the one-liners are unrelenting. Karl Shiflett in particular seems to be trapped in an old Hee Haw rerun (“My fiddler got on the airplane and set down next to a preacher….”), and what’s up with the weird faces and that thing he does with his leg? But his playing makes up for his corn. And outfits like the Hillbilly Gypsies and the Tennessee Mafia Jug Band are clearly out to have as much fun as you are, and if that means a few groaners in between truly impressive picking (and, with the Gypsies, the hottest hillbilly girl in America singing murder ballads), well, it’s just a way of reminding you that all this talk about culture and tradition is nice, but we’re here to have a good time. Continues after the jump.

On the flip side, when Lewis Family – 60 years on the road, one brother dead, one sister wasting away from cancer and another so frail that the spends most of her time on stage sitting down, trying to stare down Eternity – front man Little Roy puts away the shtick and he and his sisters start singing about death and Heaven and Jesus, there are moments of real poetry, and the kind of emotion and commitment that infuses the best of any folk art.

Bluegrass festivals are determinedly DIY affairs. Promoters build their own stages and cover from the sun and the elements can be dubious – the tarp at Parson’s was blown away in a rainstorm and I got sunburned one day and soaked the next. Fans travel by RV or jeep, bring their own chairs, sleep at the venue and stay up late jamming with one another and, sometimes, the pros themselves. And the musicians play their sets, sell their CDs, load their van and head out that night for the long drive to their next gig without roadies or girlfriends or anyone else lending a hand. It must be about the music because I didn’t see anyone who seemed to have much money, on stage or off, for the three days we were there. But tickets were cheap — $65 for the weekend — liquor was prohibited, so you’re paying retail and not bar prices for whatever hooch you have hidden in the car, there’s decent barbecue and two sides for about what you’d pay for hot dog at the Verizon Center… and swimming in the river is free. 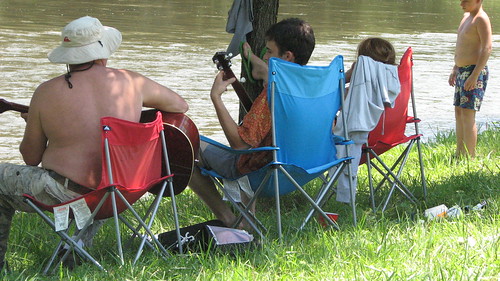 Except for the buff guy in the tank top (gay? In the service? Hard to tell, but I caught him jamming in the trailers later that night, hammering at his bass fiddle) and the woman with the high tech hiking shorts and Boston Red Sox baseball hat, my wife and I were probably the only real yuppies there. Which was fine by us. It’s nice to rub shoulders with a different crowd than you find in the Dupont-Petworth Corridor, and if sometimes it’s an odd looking crowd, I guess we looked a little odd to them, in the Madras shirt and Tevas and plaid shorts and foreign car that’s definitely NOT made through a pasture to your campsite.

McAvinue played Parson’s this year, as part of Audie Blaylock and Redline. When he steps up to the microphone, even a bluegrass rookie like me can tell he’s something special. And he tore the place up again, twice, once at noon and once at five. My wife dragged me over to their table after the show – she swears it’s just a “mom crush” on a kid who’s tall and thin and just turned 21 (a lot like our own son)—but we got chatting with him and Audie after their set and they were – like everyone at Parsons – “jest the nicest folks you ever want to meet.”

Li’L’ Margaret’s (“bring your favorite lawn chair”)is this weekend, just a couple of hours down the road from the Capitol, near Leonardstown, Maryland. There are no West Virginia Mountains to take your breath away, but the pavilion is pretty solid so you’re safe from the rain, and while you’re down there you can hunt up fresh crabs and barbecue shacks among the tobacco fields and corn off 301. The folks are just as nice, the late night jamming even better, and it still feels great to be so far from home. http://www.lilmargaretsbluegrass.com/