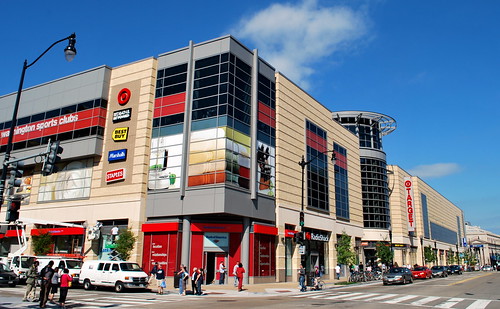 “I wanted to alert you to what the police activity was about this afternoon around 2:45 p.m. in the Target Mall in Columbia Heights.

I caught a guy opening lockers with bolt cutters in the men’s lockerroom. I had seen him when I was changing and he was looking very shifty and had bolt cutters. The staff there has a pair in case people can’t open their locks, but in this case there was no staff member present. After locking my stuff in a locker with my padlock, I went out and stretched for a few minutes. I couldn’t get the weirdness of the guy out of my mind so I decided to go back and get my wallet and phone to put in the little key lockers they have near the refreshment stand.

When I went back the man was still there and fiddling with his black messenger bag. I immediately noticed that my lock was no longer on the locker and had been replaced with another one. I stopped the guy and said, “Hey you took things from lockers, didn’t you. Let me look in your bag.” He said no. Then he told me to leave him alone and stop bothering him. Then I grabbed at the bag, and he pushed me away and there was a scuffle. Something fell out of his bag and the guy seemed really worried. He pushed me away and ran off. I told the towel attendant to stop him, and he did nothing. I chased the thief as he was leaving and shouted, “This man is a thief, he has stolen people’s wallets from the locker room.” Again the WSC staff couldn’t have been more bored. The young woman at the reception desk let him go out. I chased him out, still calling “THIEF” and an off-duty metro policeman, bless his heart, chased the guy, who by this time was running. I went to the landing to shout to the security guy at the front door of the mall, “Stop that man in the white shirt and black pants, and demand to look in his bag. He has robbed me and others.” The security person saw who I was referring to but did nothing. The thief ran out the door.

Fortunately the off duty Metro transit cop chased after him and tackled him to the ground, which I did not see or know about for a while. I was busy trying to find out who the person was, i.e. if his ID had been checked (of course it hadn’t) on entering. I went out trying to find head or tail of the guy but of course he was nowhere to be found.

Later the off-duty policeman came and said they’d caught him and that he was in custody, and that they’d found two wallets (later brought down to one: mine) and a pair of bolt cutters in his possession. At that point I realized that during the scuffle in the lockerroom had dropped the bag containing my computer and phone. Fortunately it was still where he had dropped it.

What I found most appalling was the fact that a) WSC staff are not doing ID checks on people going into the lockerrooms or entering the gym b) the staff seemed a little blase about the incident, and seemed to think this was an all’s well that end’s well affair c) the supposed “Security” people at the door of the mall are just there for decoration. I gave 30 seconds advance notice, shouting, of the thief’s approach, and security did everything but hold the door for him d) off-duty cops can be very brave and e) the MPD’s protocol for taking notes and filing reports appears, for now, efficient. The thief is to be charged with Theft (1) “if the case goes forward.”

Anyway, sorry if this is too much information but I thought your readers might want an explanation of what went down, particularly since I was yelling Thief! from the landing.”

more stories
Previous
Happy Fourth of July!
Next
House of the Day