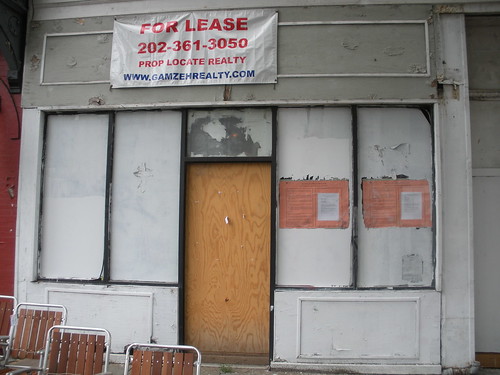 Above is the location we spoke about located at 1832 14th Street, NW. It will tentatively be named Table 14. 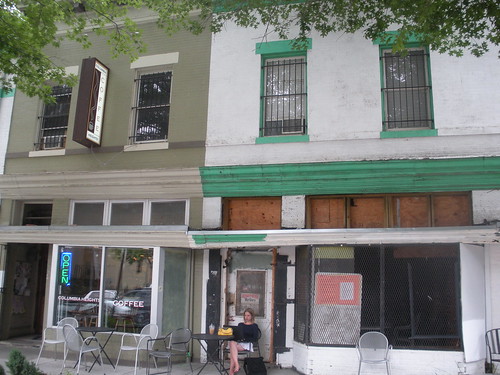 Above is the spot next to Columbia Heights Coffee that we spoke about here. It will tentatively be named Barrio.

Wow, I got an email/press release with tons of details:

The new restaurants announced by Local 16 will be located at 1832 14th St. NW and 3418 11th St. NW; both locations will be open by spring of 2010. Owners for announced locations include: Aman Ayoubi, restaurateur and owner of Local 16 and co-owner of 18th Street Lounge and Josephine; Eric Gronning of Gronning Architects, the design firm behind CommonWealth, Cork, Hank’s Oyster Bar and Marvin; and Doug Whipple of Whipple Farm. Much of the produce for each location will come from owner Whipple’s farm in Rixeyville, Va., and a network of other farmers.

Whipple Farms, a 160-acre, biodynamic farm nestled in the Virginia Piedmont region, is not only partnering in the new restaurant ventures on 14th and 11th Streets, but also supplies Local 16 and other area restaurants with locally and biodynamically grown heirloom vegetables. Local 16 has been providing financial support to expand the farm’s operations.

Executive Chef Eric McKamey will continue his role at Local 16, in addition to overseeing the menu and kitchen operations at the new restaurants.

“Eric has been a wonderful addition to Local 16,” said Local 16 owner Aman Ayoubi. “For such a young age, he brings with him a wealth of knowledge as well as an obvious talent for creating incredible and comforting dishes based on his new-old take on cuisine.”

“Working with such amazing, quality ingredients is, in and of itself, an inspiration,” said Chef McKamey. “Dedication to local food sourcing and the fostering relationships with local growers and farmers is a cause I take very seriously.”

One restaurant, tentatively named Table 14 (1832 14th St. NW), is scheduled to open in early 2010. This location will offer three distinct experiences on each of its floors. The main level is conceived as a farm-to-table restaurant serving modern American cuisine with an Italian influence. This level spans 2,000 square feet with plans for 60 table seats, 15 bar seats, 12 cocktail/counter seats and 16 outdoor seats. Interior will utilize existing textures and historical elements of the building. Features will include a two-story atrium space and an open kitchen.

Barrio (3418 11th St. NW), also tentatively named, is slated to open at the end of 2009. It will feature the same consortium of owners in addition to Lori Robertson, a Washington D.C. journalist. The establishment will serve as an affordable, comfortable neighborhood spot, offering a selection of Latin-influenced and American food. The menu will be small with a focus on home-style cooking and vibrant flavors.

“We are very excited about the upcoming openings,” said Ayoubi. “These two eclectic neighborhoods — 14th Street and Columbia Heights — and the wonderful people who live there have been an inspiration to us. We hope the Washington community receives much enjoyment [from the restaurants] for many years to come.”

Biographies after the jump. How do these spots sound to you?

Aman Ayoubi
With 30 years in the hospitality industry, Ayoubi has worked with global and luxury hotel chains, restaurants, lounges and nightclubs. Aman Ayoubi is currently a restaurateur and owner of Local 16 and co-owner of 18th Street Lounge and Josephine. In the past Ayoubi has been involved with other D.C. establishments including Red, Dragonfly, Mondo Sushi, Marvin and Current.

Eric Gronning
Eric Gronning is an architect, furniture designer and metal fabricator currently living in Washington D.C. Gronning has operated his architectural practice, Gronning Architects, PLLC, for 14 years in D.C . and the metropolitan area. His design-build firm focuses on residential, small commercial and restaurant projects. Some of his most notable restaurant projects include Cork Wine Bar, Hanks Oyster Bar, Commonwealth, Marvin and the new Pizzeria Paradiso currently under construction.

Eric McKamey
At age 25, Eric McKamey has served as executive chef for Local 16 since March 2009. This D.C.-area native has 10 years of experience in the kitchen, last holding the position of chef at Etrusco in Dupont Circle and prior to that working at Palena, Central, Proof, CityZen and 2941. Chef McKamey believes in keeping food simple and recipes tied closely to tradition. His style of cooking is modern American with an Italian influence. McKamey is dedicated to the sourcing of his food and continues to develop strong relationships with farmers and producers locally and throughout the country.

Doug Whipple
Doug Whipple is a business attorney, pianist and farmer, who lives in Virginia with his family, where he also operates a 160-acre biodynamic farm, growing high quality, heirloom vegetables. Prior to setting up his own boutique law practice, Whipple was a partner at Jones Day. He has led legal teams for such diverse companies as United Therapeutics, Harman International, Materna Information & Communications, Hyster-Yale, CitiBank, Knorr-Bremse, and Hachette. Prior to becoming a lawyer, Whipple was an R&D software engineer, and studied piano performance with Russell Sherman at New England Conservatory of Music.