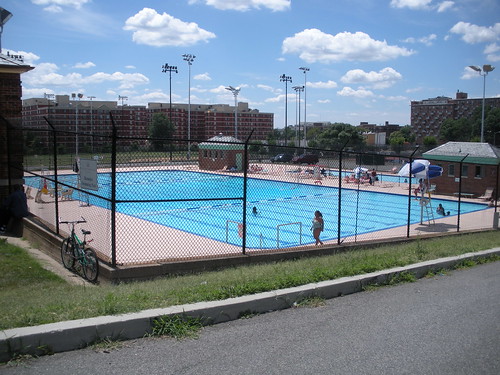 It’s funny in a very sad way that this was always going to be the FQoTD this week. As we all know by now there was a terrible day time shooting outside Five Guys in Columbia Heights yesterday. Well it turns out it was “a fight among youths attending an orientation for the District’s summer jobs program” according to WJLA 7 News who reports:

“Ward 1 Councilman Jim Graham says about 2,500 youths had gathered at the D.C. Convention center for an orientation Thursday. The meeting got out of hand, and police confiscated a revolver and brass knuckles from youths there, Graham said.”

Now even before yesterday’s shooting I was intrigued by some emails from the Petworth listserv by parents frustrated with their children’s registration process. One writes:

“As for this city and the mismanagement of funds and programs, I think it is absolutely reprehensible that this behavior is continually tolerated. When will enough people get angry and decide that enough is enough. Our public school system is terrible (with the exception of a select few schools), which has pushed parents to charter schools. The violence, though it is getting better, is still too much. A program which is supposed to help teach our kids the value of hard work is being turned into a three ring circus, where our kids are just stuck in a large room (whether it be a rec or classroom) all to say that we had a Summer Youth Employment Program. I am in my late 30’s and when I worked the Summer Youth Employment Program, I had an enriching experience each year that I worked. Have we not learned from last year’s farce where persons who were too old to even qualify for the program were being paid, some workers were overpaid, some were underpaid. When will it end?”

“This city is just so fundamentally and wholistically mismanaged. I mean at every single level it’s rife with mismanagement, absent management or no management. It’d be comical if it just wasn’t so damn maddening and sad at the same time. I mean it’s dangerous. Mismanagement at DYRS gets people killed, same thing at MPD and EMS. Mismanagement at the public schools helps ensure another generation will be consigned to poverty and all its trappings — drugs, violence, etc.”

Many of us remember last summer’s scandal. Now with yesterday’s violence coupled with the apparent dysfunction of the program from the remarks of the parents above – it begs the question – is this well intentioned program broken? If so is it broken beyond repair? Most would agree that employing DC’s youth is a valiant goal. So how can this program be fixed?