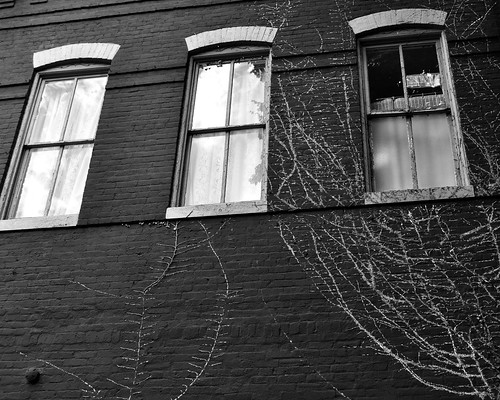 The following was written by PoP contributor Eric Nuzum.

This one is for the interlopers and sojourners in the house. Native sons and daughters can sit this one out, opting instead to monitor the comment thread and shake your heads in mild disgust.

So I’ve been wrestling with something lately and could use some advice: How does one go about explaining our neighborhood life to folks back home?

My wife and I have become increasingly perplexed by the fact that, despite moving into our Petworth home 18 months ago, neither set of parents (mine from rural Ohio; hers from rural Indiana) has come to visit us yet. Seeing that we are the first kids on either side of our families to buy homes, we expected a little more interest.

The answer came during a visit home a few weeks ago. When we pointed out the lack of parental visitation to my folks, they were pretty silent.

“You aren’t frightened of where we live or anything…are you?” I asked.

In hindsight, this didn’t surprise my wife at all.

“Think about the stories you tell them,” she said. “It’s all crack addicts and crime and problems and sketchy this and that. If that was all I heard about any place, I’d be frightened too.”

Okay, she’s right. But in fairness, when I’m telling stories, I go for the colorful and entertaining, I’m not shooting for high journalistic objectivity and fairness. However, I admit that the end product does come off a bit askew.

Going solely off my solely-for-entertainment-value stories, the unfamiliar might be left with the impression that Petworth is a place where bullets fly daily, bugs and rodents conduct their own ANC meetings, the Sunday paper contains coupons for local heroin and crack dealers, and residents mope down the street openly weeping (when we all know that only the residents of Chevy Chase walk down the street weeping, come on). You can even see from my own previous guest posts on PoP (spottily chronicled here), I admittedly tend to focus on the less-than-positive, less-than-normal, and less-than-flattering.

My wife issued a decree, right there in the car driving across the Pennsylvania turnpike: No more negative yarns and jokes about DC to family and friends.

To me, that seems to harsh, almost like suppressing elements of life here. She clarified that she wasn’t asking me to censor anything, just realize that by sharing stories and making jokes about one side of life here, I was casting the entirety in false light. I see her point. Continues after the jump.

Though, let’s be frank. Crazy shit actually does happen all the time. The day after returning from my illuminating trip home and conversation with my wife, my neighbor Tony went out to pick some roses from one of his bushes–and discovered it was stolen. That’s right, someone dug up and stole…a rose bush. Where else does this kind of stuff happen?

I guess my real problem is translation. How do I talk about life here in our nation’s capital without over- or under-emphasizing the elements of our life that someone from a small town in Ohio has no way to relate to?

I think it is important to point out another fact, before some butthole chimes in with, “Well, if you hate it so much here, move to Georgetown/Laurel/Gaithersburg/insert-suburban-enclave-here.”

I don’t hate it here.

In fact, I love it here. While this area regularly tests my attitudes, biases, and beliefs–I’m glad I live in a place where there is genuine diversity and I am challenged to act as part of a community. I’m a better person for it. It was in Petworth that I learned how to really be a good neighbor. Honestly, I wouldn’t want to be in any other place at this point in my life.

How do I translate all those wonderful complexities to my friends and family back home?