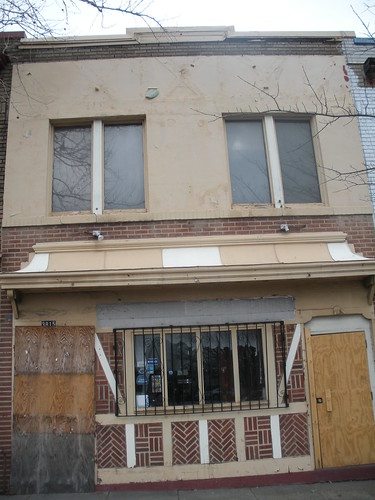 Just wondering if you had done a story before on Billy Simpson’s House of Seafood?”

Wow, how random. The building, shown above, looks rather ordinary.

The pdf above says:

“After careful consideration, the staff recommends that the Historic Preservation Review Board designate Billy Simpson’s House of Seafood and Steaks, 3815 Avenue, NW, as a landmark to be entered in the D.C Inventory of Historic Sites. It is further recommended that the nomination be forwarded to the National Register of Historic Places.

The two-story brick commercial/residential building at 3815 Georgia Avenue was constructed in 1923 as one in a four-unit row on the west side of Georgia Avenue, a largely commercial but decidedly mixed-use corridor. The row was designed in the typical, early-twentieth-century, two-part commercial block, with apartments over stores. As originally conceived, the buildings are not pure examples of a style, but reflect cost-conscious efficiency in design and plan, with minimal historicist detail in the form of a prominent cornice evocative of a number of eclectic revival styles.”

Do you think this is a good choice to be designated a historic site?

Read more →
More Stories
I Haven’t Seen a New No Dog Crapping Sign in a WhileCan We Prioritize Our Outrage?