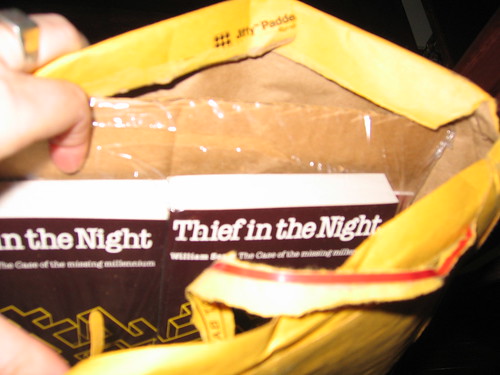 Thief in the Night, originally uploaded by Prince of Petworth.

In March we learned of a rash of stolen packages in Columbia Heights. From the CH Listserv it seems the suspect may have been caught do to the work of a good Samaritan:

“Package thiefs have been arrested. At 3pm today I saw the same woman and a guy forcefully open front door of our building and pick up two packages from foyer

I called 911 and followed them for 45 minutes to corner of 16th and Florida where cops finally stopped them. Thiefs took items out of boxes in alley by 1101 then zig zagged many blocks before they realized I was STILL following them. There, they removed some more items before eventually being arrested.

They are being charged with breaking in and entering, mail theft, etc. I will be called to court to act as a witness. Officer stated that thiefs most likely will also receive stay away order for this neighborhood.

By the way, during my pursuit I had to call 911 twice as I did not see ONE police officer from 1101 all the way to 16th and Florida due to fewer police on duty becuase of Emancipation Day(holiday).”

Nicely done. And if you want a good laugh here is the story related to the photo above.