Bladensburg feels as though it’s full of pawnshops, laundromats, and ghosts. A pre-industrial victim of environmental change, what was once one of the busiest ports on the East Coast has been scraped away, replaced by warehouses and light industry – metal fencing, transmission shops, the kind of businesses where guys show up at 7AM and have a smoke in the parking lot, before they go in to stock plumbing supplies or pull a tranny (a phrase that has a very different meaning for me than it had when I lived on 11th and Mass).

But the ghosts are there. Patsy Cline on a mural. The sailors and marines that fell under the command of Commodore Barney (think Barney Circle), who’d burned his fleet and – with a largely African American force – tried to keep the British out of Washington, after the first line of militia had fled in the face of hardened veterans of the Napoleonic wars. The ones who couldn’t walk away from the famed dueling grounds, like Stephen Decatur and Francis Scott Key’s son, Daniel, and the almost 50 others who fell there. And the World War One veterans honored by a cross whose grace is only amplified by the grey traffic circle and grim buildings it’s set against. Courage, indeed. 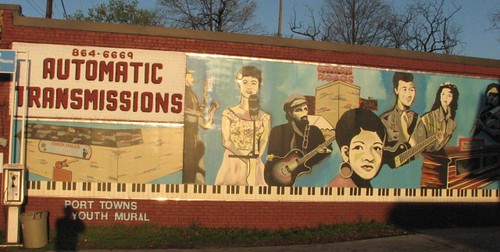 The Fort Lincoln Cemetery claims to have the most impressive publicly-owned mausoleum in the world, and it is indeed impressive, looming just above the remnants of the Civil War fort and hillside where Barney’s men fought the Brits. And, at the edge of the cemetery: the dueling grounds. Walking through the grounds at dawn, in the mist and the dew and the flowers, you can almost get a feel for the top hats and greatcoats and seconds and pistols, brilliant mornings ending badly. The traffic of Bladensburg Road disappears and you begin to wonder what it was like, rubbing that flintlock, nervously checking your shot and powder, glancing across the lawn to try and divine who’d still be alive come noon. It’s sandwiched in between a subdivision and the graveyard, and looks and feels exactly like a dueling ground should. Continues after the jump. 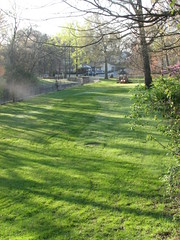 What once was downtown Bladensburg is almost all gone, now. I am told on good authority that the Crossroads Tavern is a wonderful dance hall, largely African and Caribbean. But it’s new and wedged between a pawnshop and an industrial pipe place. Across the street the Indian Queen Tavern, where George Washington did not sleep but where the first balloon in America launched, remains. William Wirt lived there, the Anti-Masonic Party’s nominee for president in 1832. And around the corner, where Washington’s gentry once traveled to take the waters at an exclusive spa, there now stands a cinderblock building housing a Mercedes shop.

Floods, silt, the transformation of tobacco farms into blue collar housing….Bladensburg peaked in the 1840s. But still – two excellent murals (Port Towns is an effort to rebrand Bladensburg and the surrounding communities that seems not to have brought the economic growth the area needs). A wonderful Catholic girl’s school named after America’s first saint (Elizabeth Seton, for you non-mackerel-snappers out there) that also has an excellent rowing team, which is why I get there at sunrise every now and again to be amazed by the hawks and the herons and the red-wing blackbirds who somehow turn the Eastern Branch, with its trash and its funk, into a beautiful little space. 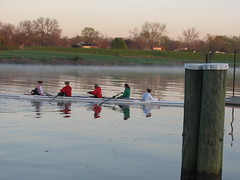