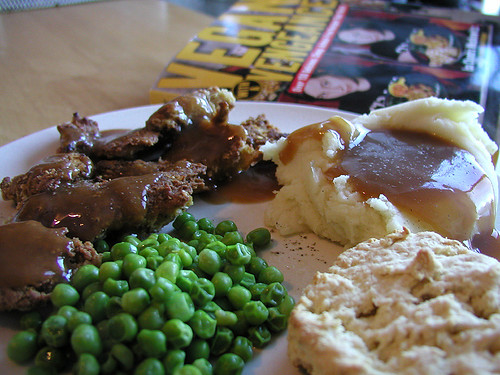 Vegan with a Vengeance, originally uploaded by massdistraction.

There’s a type of person out there that really get under my skin. A “verbal vegan.” They’re different than your average crunchy-granola, mild-mannered vegan. The verbal vegans stare at your steak in horror, as if you’re eating an endangered species (like the adorable, overlooked red panda bear), and then remind you that if that steak were, say, a mound of grass, everyone third world countries could eat like kings. They never miss an opportunity to whip out an album of slaughterhouse pictures in an attempt to convert carnivores, and they protest honey because it’s “bee slavery.” A burger-loving friend once found a very cheap room in a vegan co-op. The roommates bought into his fabricated passion for PETA and organic exotic fruit (it helped that he’s an actor). That is, until about a month later when he snuck off to Five Guys. They caught him red-handed (he attempted to sneak his dinner up to his room), and after an infuriated tirade of lectures on how meat-eaters are the scum of the earth, promptly kicked him out. Look, I have vegan friends, and I wholeheartedly respect and appreciate their cause. It’s just the judgmental vegans that give endless sermons on demonic butter, cheese and egg lovers that are like fingernails on chalkboards. For the sake of agreeing to disagree, don’t judge my food and I won’t judge yours.

Well, admittedly, I used to judge vegan food, quite harshly. I thought when vegans tried to replicate meat recipes with a tofu and soy cheese concoction, it not only looked like snot but has most likely tasted like cumin-flavored Jello. But, thanks to the kind souls of veggie friends who took my stubbornness against their food for ignorance, I’ve been introduced to vegan eats around DC that make me consider abandoning meat. Until I pass by the Peruvian chicken place on Park Road and can’t resist.

My picks for the best vegan food carnivores are, in no particular order: the tofu curry at Everlasting Life, Cookies n’ Cake cupcake and Bacon Lettuce Tempeh at Sticky Fingers, Vegan ‘buffalo wings’ at Asylum, veggie sushi at Sticky Rice and Uni. Both Red Rocks and Moroni Brothers serve vegan cheese upon request. And who knew you could make a vegan sandwich at Amsterdam Falafel?