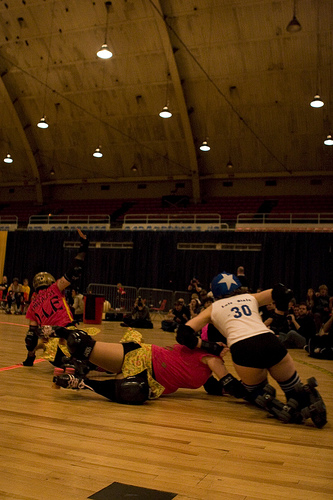 For those who want to check out the action live on March 14th, there is more info after the jump.

Washington, D.C. – The final days of winter will bring heated rivalries together when the DC DemonCats
face their next opponents, Scare Force One, at the D.C. Armory on March 14.

The DemonCats bring the momentum from their February win into this much-anticipated battle of skills and
thrills. Scare Force One has trained and built up its roster, keeping its eye on the prize—another win on the
road to the May championship. Both teams have added new talent, making this a bout not to be missed.
To start the action, DCRG’s own Cherry Blossom Bombshells will line up against the Boardwalk Brawlers
of Shore Points Roller Derby. Visiting from the Jersey shore, the Brawlers completed their debut season in
2008 and have yet to slow down. Will a Bombshell defense put the brakes on the Brawlers?
At halftime, the DC Anime Club will present a ―Cosplay Fashion Show,‖ showcasing costume
craftsmanship by its members.

Tickets are just $12 for ages 12 and up, $6 for children 6 to 11 and free for kids 5 and under. They are
available in advance through Ticketmaster (www.ticketmaster.com) or at the door on bout day.
The D.C. Armory is located at 2001 East Capitol Street, SE, in Washington. Secure lot parking is
available for $7. In addition, the Armory is adjacent to the Stadium-Armory Metro Station on the Blue
and Orange lines.