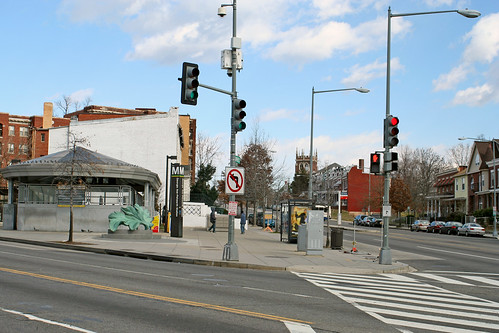 Given yesterday’s PoPtrekker focusing on Georgia Avenue, this is good timing for an update on the Great Streets initiative. Note #2 that says there will be an area for a future Farmer’s Market! Thanks a million to a reader for sending:

This is the last segment anticipated for improvement as there is at least one major private development anticipated in the area and complicated intersection conflicts that pose significant challenges and require detailed study. Federal aid will be required to complete improvements in this segment as Great Streets funding is insufficient. Coordination with the community will begin with the initiation of analysis. Segment is schedule is quite a bit in the future. Alternatives analysis will begin in 2010 with design and construction to follow.

Concept design was completed in 2007 through an intensive community involvement process which included the Upshur Street businesses. Design includes major streetscape improvements, improvements to small park areas along the corridor, operational and parking improvements, and accommodations for future farmer’s markets or other uses of the public space. There is broad public support for the improvements. Engineering design is nearing completion (at 65%) and construction is
anticipated later this year.

3. Lower Georgia Avenue and Howard Segment (Otis to Euclid and Euclid to Florida)

Transportation study and concept design completed in 2007. Study assessed the impacts of changes to Sherman Avenue on Georgia Avenue and vise verse in order to maintain system integrity. Concept design included streetscape improvements celebrating the African American heritage of the area such as public art and unique crosswalk patterns. New lighting has recently been installed in the area. Issues may be that improvement in this area is delayed and tied to the major private development (which will affect over 3 blocks of the 7 block area).

Concept design is complete. Design implements the small area plan completed and adopted for the area and has been closely coordinated with DMPED rehabilitation and reuse of historic Howard Theatre. Design (at 65%) will be completed this summer with construction next year and includes major streetscape improvements and improvement of the T Street plaza. Project is on schedule with no anticipated issues.