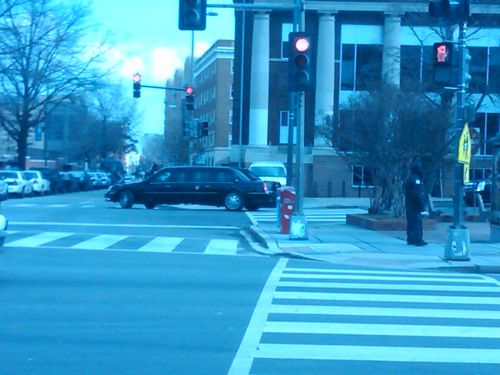 “At the school, the president and Michelle Obama read to a group of second-graders in the school library from a picture book entitled “The Moon over Star,” an account of the first moon landing in July of 1969.”

And many thanks to the reader who caught the motorcade and sent the above photo. Our man on the scene writes:

“They was there for about half an hour, they came in the front door and then left through the side door in the alley. At first they had everyone on the Mt Pleasant side of 16th street, then they moved us all to the corner of 16th and Irving across from Bell Multicultural High School. There were about 50 people there on the corner waiting for them to leave the school. One we were all on the sidewalk they put up police tape. Once the motorcade started a police car pulled up right in front of us as well. As they were pulling away the Obama’s were in the second limo and he looked over at us on the sidewalk and waved.”

In less than a month the President has been to U Street and CH/MT. P – gotta love it.