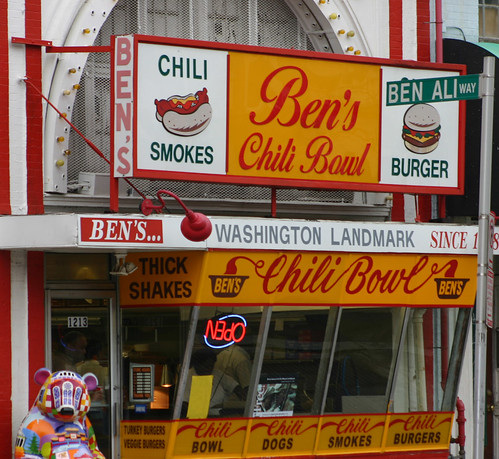 Thanks to all who sent me notes about this historic visit. Sadly, I was in the area about half an hour earlier and had no idea what was about to happen. The Huffington Post reports:

“Barack Obama dropped in Saturday afternoon for a bite to eat with Washington’s mayor, Adrian Fenty, at Ben’s Chili Bowl, the venerable diner in Washington’s U Street district.

Obama said it was his first time visiting Ben’s Chili Bowl and “it was terrific.” The expectation is that Obama _ already at ease in big cities from his time in Chicago _ will venture into town more than President George W. Bush, who rarely made forays into unofficial Washington.”

Was anyone there Sat. afternoon? For other genuine tastes of DC where would recommend Obama visit for a bite to eat? I’d recommend the Hitching Post or the Florida Grill.