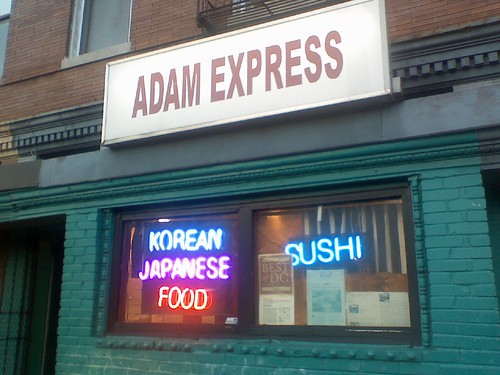 I’m pretty sure that it’s mostly because I have the sense of humor of a five year old – but I find the word Bibim Bap to be hysterically funny. Even funnier that it is the name of a meal, a meal that up until a couple of days ago I found to be equally funny looking and also sort of gross.

As Asian cuisine goes, for the most part I love it. Chinese, Japanese, Thai, and Vietnamese are all among my favorites. Admittedly I haven’t had much exposure to Korean delicacies in my day, but I have to say I’ve never really been a fan. So, even though it was right in my ‘hood, I had never really been tempted to try Adam Express. 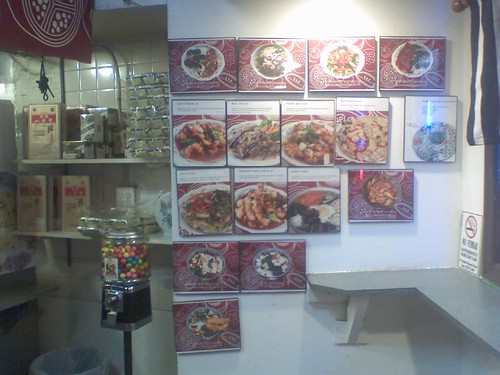 Recently, though, I’d been hearing a lot of buzz about how great it is. The CityPaper named it Best Korean Food in the District, and a reviewer on the DCist notes that while you might find better Korean fare in the suburbs of VA and MD, Adam Express is arguably the best in the District. And, my limited basis for comparison aside, I now have to agree.

After a year and a half of walking past the somewhat sketchy looking storefront almost daily, I finally took the leap and stepped inside just the other night. Immediately I was struck by how cute it is. Were it not for the cash register, it would seem like you were in someone’s home. The place itself is tiny, with window seating for only four or five on rickety stools that seem like they might fall apart any second. In addition to a number of newspaper articles lauding the authenticity and deliciousness of the food, the walls are covered with family photos, and a bulletin board tacked with thank you notes from an elementary school class. Past the counter you can see right into the kitchen, where the really sweet couple (Seoul natives) who own the place lovingly prepare each meal for a steady stream of customers. Story continues after the jump.

Not feeling terribly adventurous, and given that I had already determined I don’t care much for Korean food, I decided to give the bibim bap another go. It also helped that in the few minutes I spent deliberating three people came in and ordered the same. There was a bit of a wait, but it was totally understandable given that each meal is cooked to order and there are only two people in the kitchen.

Once my order was up, I was actually kind of excited to eat it. It looked, and smelled, really good! I think the fact that they served the dish topped with a fried egg gave it a more pleasing aesthetic. I love me some eggs, but for whatever reason the usual sunnyside-up egg atop a bibim bap tends to gross me out. Anyhow, I scooped on some rice, topped it with the tasty Kim Chee and hot sauce provided, mixed it all up and dug in. And I have to say, it was pretty delicious. 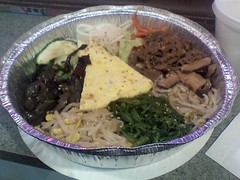 Overall my experience here was excellent. My food was yummy, and the environment was cute and kind of comforting. For those who don’t find tiny spaces and rickety stools a suitable atmosphere for dining, you can call ahead and take your order to-go. My friend and I chose to eat in, and over the course of our meal the place remained packed with both eat-in and take-out diners. Almost everyone ordered the bibim bap, which tells me that either Adam Express’ customers are just as timid as I am when it comes to Korean food, or it really is “that good.” I think I’m gonna have to go with the latter.