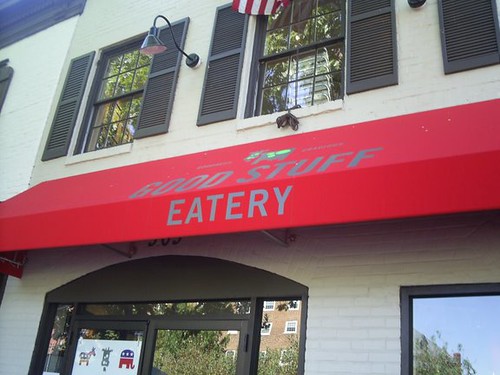 With all of my newfound spare time, I’ve been lucky enough to spend a lot of afternoons out and about in the neighborhood with Ramona (my dog). There’s no better time of year for it and it’s great to not have to cram everything in just two days at the end of each week.

Last Friday I finally got around to hitting Good Stuff Eatery on Pennsylvania Ave. It opened earlier in the summer to much fanfare as part of the city’s burger craze, and every time I’d been past, it had lines out the door. I hate waiting in lines more than I love a good burger (which is to say, a lot) so I never made it in.

Now, I feel I should mention that I am not a fan of the Bravo Network’s Top Chef. I watched one or two episodes of whichever season had the guy with wacky hair who was always making foams from things. I love cooking shows of all sorts, but I just don’t like Top Chef. So that Good Stuff is the brainchild of “Chef Spike” means nothing to me, but people seem to have opinions on this subject, mostly of the ilk, “Wow, that guy was an ass.” But I have no idea, I was just psyched for a good burger. Story continues after the jump.

I went with a friend of mine who was kind enough to do the line waiting for us while I held a table outside with the pooch. In honor of the election, Good Stuff is featuring an Obama Burger and a McCain Burger. We both opted for the Obama Burger, which was topped with bleu cheese, horseradish mayo, onion marmalade and bacon. (Politics aside, bacon and bleu cheese will win me over every time – the candidates should remember this in November.) Its companion, the McCain burger, was certainly tempting (chipotle mayo, corn roasted red pepper salsa and jack cheese) but I had to go with the bacon. In addition to our Obama Burgers, we split an order of fries, and each got a milkshake. Toasted Marshmallow for me and Black & White for my friend.

The wait wasn’t terribly long around 1:30pm on a Friday. My friend first brought out a variety of dipping sauces from the Sauce Bar for our fries. My favorite was the sriracha, and I could take or leave the Old Bay and Chipotle. The fries themselves were okay – not great (we got Sunny’s Handcut Fries, not Spike’s Village Fries which are seasoned) but adequate. My biggest issue was that I felt that perhaps we got the bottom of the fry basket, because they were all like fry nuggets. Not one fry in our bag was longer than 2 inches. I know that’s a weird thing to complain about, but when you’re going to have dipping sauces as a feature, please don’t make me have to work hard to keep my fingers out of the sauce. My friend did say that the onion rings looked delicious, though we didn’t try them. 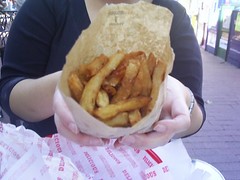 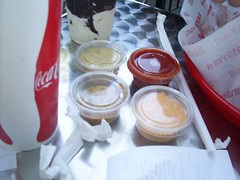 The main attraction is supposed to the burgers. I love a lot of toppings; the messier the better. So the burger looked good, but previous reviews had warned me to keep my expectations low. I was glad I did. The toppings were indeed delicious. The burger could have been from Five Guys – which isn’t an insult, but for the price at Good Stuff I’d have preferred to select how my burger was cooked (a sentiment crystallized by my dining companion, who doesn’t even order her burgers “as rare as you will cook it” like I do). It wasn’t bad at all – it just wasn’t spectacular and without the toppings it would have merely rated an “eh.” 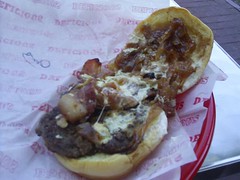 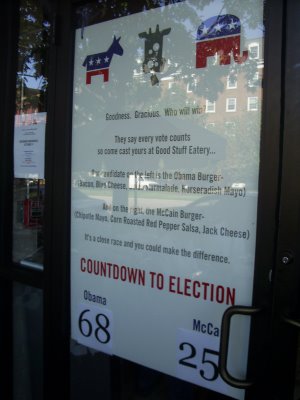 Redeeming the entire meal were the milkshakes. My friend’s Black and White looked amazing, and I don’t even like chocolate. She said it was amazing. My Toasted Marshmallow was a cup of heaven, and even if I don’t go back to try the burgers again (which, in fairness, I probably will) I will absolutely stop in for a shake. 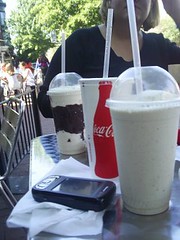 So overall, Good Stuff was okay. Definitely not worth the lines and as seems to be the case with most of the city’s new burger joints, doesn’t quite live up the hype. I’ve heard good things about Ray’s Hellburger across the river (including that you can choose how your burger is done), but I’m hoping that in time I won’t have to make that trip for a good burger.