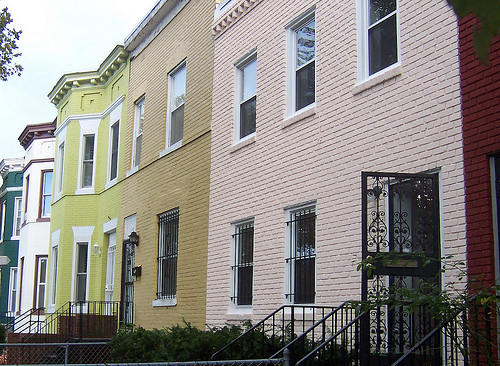 Those of us who were around DC before the early 2000s, a relatively short time ago, can remember areas like Columbia Heights and Bloomingdale being dotted with several abandoned, boarded houses per block. Around that time, with the introduction of an internet bidding system, there was a major overhaul of the management of government owned real estate. It was deemed that the federal government was not in the business of residential property management and that this extensive inventory, comprised of houses that had been financed with FHA loans and were ultimately foreclosed upon, needed to hit the market. Thus began the speculative housing boom that revitalized many areas of the city.

As the market got hotter, the prices escalated, properties got renovated and re-sold, and there were fewer and fewer affordable shells on the market. Now that we are seeing a changing of the tide in the economic landscape, bank owned properties or REOs, are starting to appear on the market once again. The current bank-owned inventory is not, however, being managed by the federal government this time around, simply because for several years buyers did not frequently utilize FHA loan products.

Within the past month, I helped a couple of first time homebuyers make a deal on a bank-owned property in the Truxton Circle neighborhood of NW DC. (The house is pictured above on the far right). The property had been sold in August of 2006 for $500,000. When we wrote the offer, it was listed at $249,000. It was in surprisingly good shape for a foreclosure, and anybody that’s been perusing the market lately in DC knows that it’s tough to come by a decent one bedroom condo in NW for under $300,000. Not unexpectedly, two other offers came in at the same time ours did.  Story continues after the jump.

In addition to foreclosed properties, there are a lot of listings that are identified with the qualifier, “potential short sale”. This language indicates that the borrower owes more than the current market value of the home. While it is possible to get a good deal with these homes as well, there is a lot more red tape and uncertainty to deal with. Because short sales require approval from the lender, often the buyers can be left waiting in limbo not knowing whether their offer is accepted for thirty days or more. In the case of a foreclosure, the bank has already taken legal possession and has assigned an asset manager to deal with that specific property.

Bank-owned property can often make for a good buy, but it is not for the faint of heart. Often the properties are not in good condition. If they are in seriously bad condition, the only course for financing is a renovation loan (or cash, if you happen to have it on hand). I’ve recently worked with a couple of people who took advantage of the FHA(203)k loan product, which is a great option, but for homeowners only. (In response to the previous lax lending environment, investor rehab loans have become prohibitively expensive.) In most cases, it’s possible to incorporate an inspection contingency into a contract, however bank-owned properties are typically sold in AS IS condition.

Here is a sampling of some current listings of bank-owned property in a variety of DC neighborhoods: http://matrix.mris.com/Matrix/Public/Email.aspx?ID=27211661856 .

More Stories
One Year Ago Today…What’s The Appeal of Madame Tussauds Wax Museum?