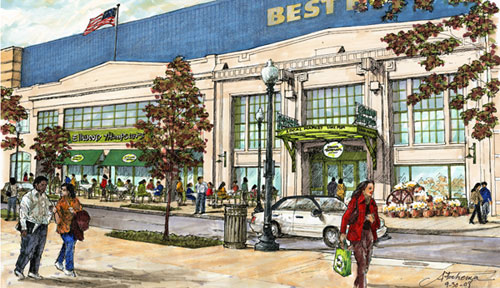 In the most anti-climactic news of the week, the Ellwood Thompson deal was finally signed bringing the grocery to the DC USA Complex in Columbia Heights. Don’t get me wrong, I think this is great news. It was simply known for quite a while. I guess I’m a little disappointed because I and a number of local bloggers had recieved an email tip saying “Heads up // big DC culinary news coming this week…”. So I guess I was hoping that a Peter Lugar’s Steakhouse was going to open up in DC. Anyway, I think the drawing looks great. And from what I hear the store will be a great addition to the neighborhood.

They did produce a great video about the store:
From the press release:

“The local, organic and natural market is slated to open in fall/winter of 2009 and will be nearly 15,000 square feet. In addition, this growth will bring 90-110 new jobs to the area, everything from managerial to general positions, with great benefits and a unique and meaningful working environment.

Like the Richmond store, each department of the Columbia Heights market will emphasize local products found within a 100-mile radius. Offerings will include naturopathic vitamins, supplements and personal care, local produce, bulk, meat and seafood, wine, cheeses and fresh baked goods. Prepared foods from Ellwood’s Kitchen will be led by award-winning chef and vegan cookbook author, Jannequin Bennett. It will cater to intentional eaters as well as provide a variety of natural, organic, and ethnically diverse dishes. Those who elect to eat vegetarian, vegan, gluten-free, and/or raw foods will find plenty of options in all departments. There will be inside and outside community seating with wireless internet available.

Ellwood Thompson’s will also offer incentives for conservation and recycling in the form of monetary envirocredits for walking, biking and mass transit and reusing shopping bags, water and food containers.”

So I guess the question is will you shop at Harris Teeter in Adams Morgan, the Giant on Park Road or the upcoming Ellwood Thompson’s?