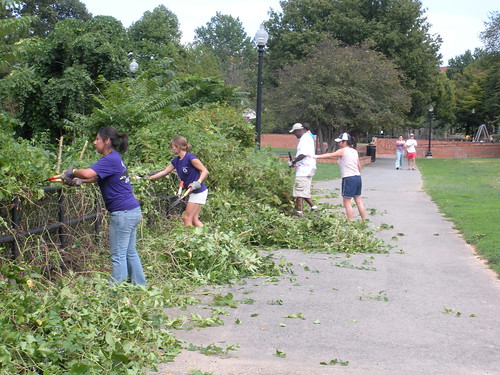 For those that may have been inspired by John’s post about Walter Pierce park, I received the following in an email:

JOIN US SATURDAY, SEPT. 27, from 9 a.m. to Noon to CLEAN UP WALTER PIERCE PARK, in preparation for the next phase of the archeological survey being conducted by Howard University, with the support of the Adams Morgan neighborhood.

We need EVERYBODY’S help to clear trash and overgrowth so that the Howard team, under the direction of Professor Mark Mack, can begin its ground-penetrating-radar (GPR) survey of the historic Quaker and African American cemeteries at Walter Pierce, where more than 7,000 people were buried in the 19th Century. The City Council, under the sponsorship of Ward 1 Councilmember Jim Graham and Parks Committee Chair Harry “Tommy” Thomas Jr., has provided substantial taxpayer funding for this survey, which will allow us to identify and protect vulnerable graves in the park. This second phase of the two-year-old archeological survey will start in October.  More after the jump.

The GPR equipment will be hand-dragged on wheels by the team across the ground. It will send electronic impulses into the earth. Signals bouncing back will tell the team of any anomalies under the surface of the earth, including such things as remains, grave shafts and artifacts. During the first phase of the survey, which involved no digging, the Howard team located and documented the exposed remains of at least eight individuals in the park. The GPR survey will allow the archeologists, in a non-invasive way, to determine where vulnerable graves still exist under the surface of the earth, so that they can be protected.

Our goal on SATURDAY, SEPT. 27, is two-fold: Clean up the park for park users, and remove invasive overgrowth for the archeologists. We will NOT be cleaning up the west hillside down to Rock Creek this time as we have in past clean-ups, because it is now too dangerous, with fallen and leaning trees, dirty underwear, and drug needles. We need to call in professional help to take care of this National Park Service property. But it does need to be cleaned.

Come for the morning, or come for just an hour. DRESS CODE: MESSY. It’s best to wear sturdy shoes, long sleeves and long pants. We’ll provide the the tools, work gloves, trash bags and refreshments. The clean-up is being sponsored by the Kalorama Citizens Association and Washington Parks & People.

PS: Feel free to circulate this announcement to your friends and other lists. If you live outside the Adams Morgan neighborhood, Walter Pierce Park is located just east of Rock Creek at the Duke Ellington Bridge, and just south of the National Zoo. There are entries to the park at Calvert Street and Adams Mill Road. Several buses stop here, and its about 5-10 minutes walk from the Red Line Woodley Park-Adams Morgan-Zoo stop. There are no facilities in the park.