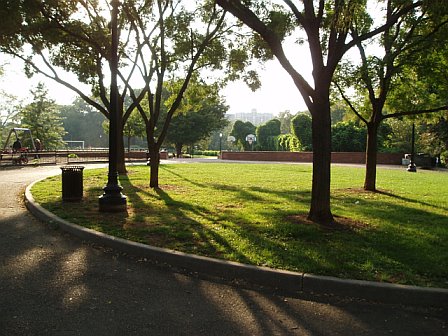 One important feature of Walter Pierce distinguishes it from many other city parks: while control ultimately lies with the DC Department of Parks and Recreation (DCDPR) the park is managed by the “Friends of Walter Pierce Park”, a nonprofit organization dedicated to enhancing and developing the park through advocacy, park maintenance, and special projects.

Friends of Walter Pierce Park, President M. Mindy Moretti took some time to discuss the park, the work of the “Friends” and her vision for the future of the park.  Story continues after the jump.

The “Friends” was established in 2000 in order to remake what was an underutilized and sometimes unsafe park into a meaningful community resource.

Residents raised money to build the children’s play area and some strange picnic-tables-with-canopies were removed.

Throughout the 19th Century, Walter Pierce Park was the site of two cemeteries: Washington’s first Quaker burial ground, and a much larger African-American cemetery.

In 1807 Jonathan Shoemaker, who owned the land and operated a mill along Rock Creek, donated about an acre of his property to the Religious Society of Friends, (Quakers) for a burial ground. The location of this cemetery was at the east end of the ball field.

From 1823 to 1870, President John Quincy Adams and his heirs owned the land that makes up the park and sold six acres of it to the Colored Union Benevolent Association for an African American cemetery. It operated from 1870 to 1890. Recent research into the cemetery has revealed that at least 7,000 burials occurred during that 20-year period, throughout the park and down the hillside to Rock Creek.

Some disinterment took place in the 1940s, but the continued discovery of remains prevented builders from developing the land. The presence of the historic cemeteries helped preserve the land that today is
Walter Pierce Park. 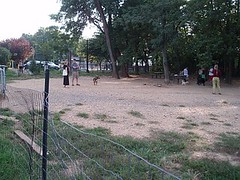 Walter Pierce contains (probably) the only dedicated, fenced dog park in DC. The actual, legal status of the dog park is ambiguous, but it’s fairly clear that this space is perfect for Walter Pierce – with sports and children’s play areas coexisting nicely with the needs of neighborhood dogs.

In 2002, the Friends approached the DC Department of Parks and Recreation with a proposal to create a dog park in a section of the park that was considered the domain of those who prefer to consume their refreshments from containers clad in brown paper bags.

(The Friends wanted to emphasize that usable, green space was not sacrificed for the dog park.)

While the dog park has been sanctioned by the City, it still exists in a quasi-unofficial state – there remain disputes over who is responsible for maintaining the fence, for example. However, the Friends are in ongoing negotiations with the City to make the dog-park official and continue to make improvements: a new fence is high on the list of priorities.

The dog park is considered a success and has generally reduced uncomfortable interactions between non-dog users of the park – and dogs and their owners. 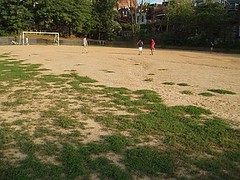 I use the word “field” in its broadest possible sense. In my mind, a “field” should display a least a hint of grass. This is perhaps more of a “soccer desert,” or even an attempt to recreate the beach soccer of the Copacabana in Rio right here in NW DC.

Sadly, the “field” is in terrible shape, mostly due to bureaucratic incompetence. Back in 2004, DCDPR paid to have the field renewed and re-turfed. Problems with the contractor and with the irrigation system resulted in the mess we see today.

It seems that the irrigation system only had two settings – “on” or “off” – the field became soaked and sprinklers were running during rain storms etc.

When the Friends raised this issue with DCDPR, the response was simply to turn the system off, resulting in a dust bowl that could inspire John Steinbeck to words.

Use of the soccer field has also been under scrutiny. Currently, adult softball is banned from the field due to errant balls hitting cars on Calvert Street.

Kickballers were warned about their behavior in the park (public drinking, foul and abusive language in the presence of children). More recently however, the kickball leagues that use the park have worked to improve their image and address some of these issues. Kickball in the park during the spring went smoothly, although no kickball sightings have been reported so far this fall. Kickballers were also said to be enthusiastic participants in recent community efforts to clean up and maintain the park.

The future of the field remains undecided. The City will only resurface the field on the condition they erect a six foot, locked fence around it, potentially meaning access to the field would require booking, in advance, through the official channels.

With no permanent DCDPR staff onsite, soccer or kickball leagues would rely on the DC DPR to arrive on time to unlock the gate and grant access to the field. This is obviously a less than desirable situation.

Plus, it would really limit potential for pick-up games, forcing soccer players to scale a fence and technically “break the rules” just to get a game.

There are also concerns about how the proposed fence would affect safety in the park – especially at night. With a fence around the dog park on one side around the field on the other, those walking their dogs or strolling through the park would literally be fenced in on the path – potentially a vulnerable situation.

The Friends remain hopeful that because the current situation was caused, at least in part, by problems with city contractors and their irrigation system, the city should agree to resurface the field without fencing it off. 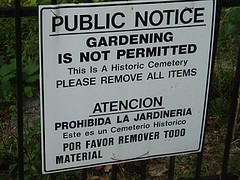 For a number of years, Walter Pierce contained a community garden where local residents could exercise their gardening skills and grow flowers, produce etc. However, soil erosion revealed to gardeners bones and fragments of coffins from the sites previous use as a burial ground.

The DC DPR suspended gardening from this area and commissioned an archaeological survey of the park. The first part of the study involves a walk-over survey of the park. This is a non-invasive way to quickly determine the amount and location of archaeological and/or skeletal evidence at the surface by creating 10 meter by 10 meter grids in the park which a student team will analyse – measuring, photographing, describing and mapping everything they see on the surface.

Ground penetrating radar will also be used to learn more, in a non-invasive manner, about this sensitive and historic site.

Suspending the gardening was clearly the appropriate thing to do, but community gardens in general are an amazing neighborhood resource. This particular community garden was run on a fairly ad hoc basis – a local volunteer would basically assign plots to those gardeners who applied. Some got really ambitious – reports of some serious farming going on.

The future of the site is still to be determined, but proposals include a garden or memorial to commemorate the site’s history. Ideas from the community as to how to use this site in an appropriate manner are welcomed.

The park we currently enjoy to be a vast improvement on what was there some years ago. The main mid-term goals of the Friends are to secure official approval and recognition for the dog park – which would allow the DC DPR to build a new fence, resurface the ground in the dog park and provide a water source.

In addition, Friends hope to see a reasonable compromise on the issue of the soccer field which would see the field resurfaced and appropriately maintained without sacrificing access and aesthetics in the form of a great big, locked fence.

Thanks again to Mindy Moretti for taking the time to share some of the history of this wonderful park.