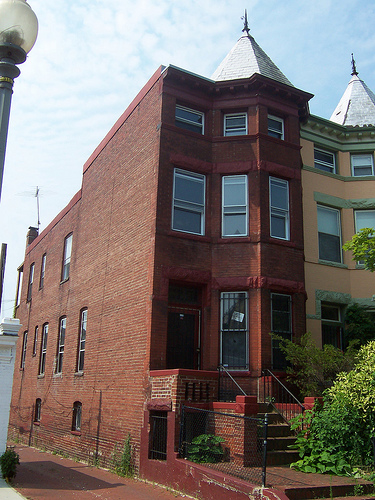 I am the broker who represented the adventurous and creative people who purchased this house. I have something of a run down old house fixation, and it’s fun to see them made livable again (by other people). Because these were regular folks (I mean, not architects or developers) who bought this house, I thought it might be of interest to the PoP readers. If anyone is interested in the financial aspects of this type of transaction, feel free to e-mail me directly at [email protected].

It wasn’t a complete surprise that Mark and Charles would end up purchasing something to renovate. They had done their homework and had, without me, already located the lender I recommend in DC for rehab loans. They had experience updating their two bedroom condo in the historic district of LeDroit Park. Having become involved in the community, they were hoping to find something nearby, within LeDroit Park or Bloomingdale (which is also the neighborhood I live in.) The idea of being adjacent to Crispus Attucks Park was very appealing.

We looked at a lot of houses. Everything that we looked at that had already been updated or renovated seemed to have odd layouts or poor quality workmanship, or some glaring issue that just seemed too much trouble to deal with. We attempted a couple of offers, but never made it to an agreement with the Sellers.

The W Street property came to my attention, as so many of these derelict properties do, not through the multiple listing system, but through a contact from an investor. When I first heard about the property, because of the condition, it seemed like something that would make sense for one of my architect clients. I also brought some other buyer clients by, who had the idea that they wanted to renovate, but the extent of the work needed was overwhelming to them, and we moved on to places requiring more cosmetic changes. I mentioned the house to Mark and Charles and they were game to take a look.  Story continues after the jump. 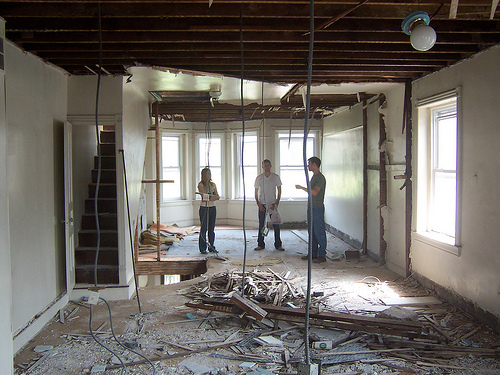 The house had already been gutted by the owner previous to the current investor-owner. What this means is that the existing kitchen, bathrooms, plumbing, heating, electrical systems, and walls had been ripped out. Much of it had been removed, but a big pile of debris resided in the middle of each floor. Each step dislodged a powdery mixture of plaster and dust. The only pieces left of the original house were a scattering of ceramic tiles from the foyer and the fireplace. Even the original staircase had been removed, leaving a gaping circular hole in the second floor.

Since we hadn’t yet seen any properties in this state, I wasn’t sure how the guys would react. I know, however, when someone shares my affection for “houses with possibility” when they exclaim, “Oh, this is so cool!” So it was, that we began the process of negotiations.

Over the subsequent weeks, we met the appraiser, a construction estimator, contractors, subcontractors, and architects. Mark and Charles invited some friends with renovation experience to come through and offer suggestions. I will forever think of these friends as “the people who renovated the house with the dead body seeping through the floor.” Yes, they really did. Fortunately, that was not an issue with this property.

At each visit, curious neighbors would pop over, initially to make sure the house wasn’t being destroyed any further by a bad developer, and later on to check on progress. At one point, it was mentioned that a set of former occupants of the house had allegedly sold methamphetamine, which prompted me to spend an entire evening educating myself online about evidence of meth production, which is a serious disclosure issue. (The conclusion of my research was that it was unlikely there had been a lab on the premises.)

The sales transaction concluded last week, but for Mark and Charles, the real work is just beginning. I made sure they went down to Tax and Revenue immediately after closing to apply for an exemption to the Class 3 vacant property tax. Now the fun of applying for permits begins. I look forward to keeping up with the renovation, and I know that, not only is it one less vacant, abandoned property in the city, it will, eventually, be an absolutely stunning home.