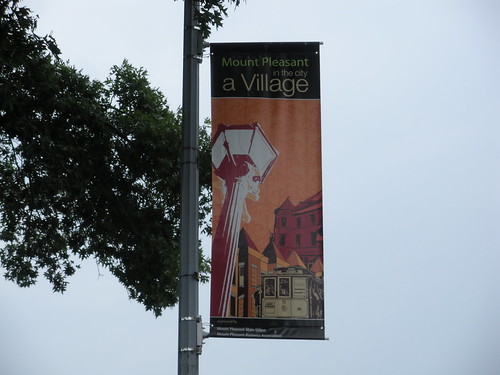 Thanks to all the readers who sent me the info. Sounds awesome. One of these days I’m going to arrange a PoP walking tour…

“Saturday, September 13
10 a.m. – 12:00 p.m. Walking Tour
Mt. Pleasant
Historical Society of Washington, DC
Admission: Free
Join master guide Jeanne Fogle on a guided walking tour around the
District’s historic Mt. Pleasant. Between 16th Street and Rock Creek
Park, just north of lively Adams Morgan, is the culturally diverse,
Mount Pleasant neighborhood. In 1727, Charles Calvert, 5th Lord
Baltimore awarded a land grant for present day Mount Pleasant to
James Holmead. This estate also included Adams Morgan, Columbia
Heights, Park View, and Pleasant Plains neighborhoods. James’s son,
Anthony, inherited the estate in 1750, and named it Pleasant Plains.
In the early 1800s a popular racetrack was built in Pleasant Plains
and the streets were named for colleges, universities and scholars,
and some streets like Harvard Street, still exist. During the Civil
War, New England native, Samuel P. Brown, bought 73 acres of estate
between 14th and 17th Streets NW. After the war, he sold the land in
parcels, and called it Mount Pleasant Village because the area was
the highest elevation land in the original Pleasant Plains estate.
With the development of Washington’s streetcar system, Mount
Pleasant, was ripe for development. Between 1900 and 1925 many
houses and apartment buildings were constructed. Mount Pleasant was
marketed to middle to upper-middle-class people. Washington
luminaries like actress Helen Hayes, Washington Senators’ pitcher
Walter Johnson, and US Senator Robert LaFollette made their homes in
Mount Pleasant.
For the walk, wear comfortable walking shoes and bring a bottle of
water. No recording devices may be used to record the content of the
tour as it is given. Meeting place: Mt. Pleasant Library, 1600
Lamont Street, NW. Limit 25 people. Registration required. (Ages 12
to Adults) [email protected] or 202-383-1828 FREE”