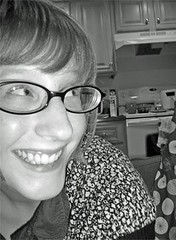 “This is Mo. Mo is the coolest roommate in PoPville for more reasons than just her hair, though as many people know, her hair is the raddest on the block. It’s so rad, it has its own ego. The real reason she’s the coolest roommate ever is that she’s one of the most supportive, generous, and downright hilarious people I have ever met. She shows her supportiveness in many ways, such as sincerely and enthusiastically complimenting my cooking, even when said “cooking” involved heating the contents of a can/jar/box. On top of that, a day never goes by that she doesn’t tell me how great I am! (As a result, my ego nearly matches that of her hair.)

Mo is one of those folks who is very generous with her friends. Whether it is with her time and affections or more material things, she can not be accused of stinginess. She’s as likely to get a random present for someone when she’s out shopping as she is to buy for herself, and you never know when you’ll be surprised with a hug (an especially good remedy for bad days).

I’m struggling with how to properly contain her hilarity in text. She’s one of those

people with completely contagious laughter, and she spends most of her day laughing. As our brains were spawned in the same jar, we are able to transmit our many inside jokes with a mere glance in each other.

Due to her good humor and general charm, she is also an easy person to spend a lot of time with. She’ll happily nerd it out with me at nerdy conventions and conferences, laze on the couch playing video games, or head out to trivia at Nelly’s. We have a baby apartment which would be (more than) unpleasant with anyone else. It’s hard to imagine living without her!

All of this is true, and ought to be enough to win her coolest roommate alone. But something that I think will appeal to all people who have lived with others, and not just to me:

She always does the dishes.”