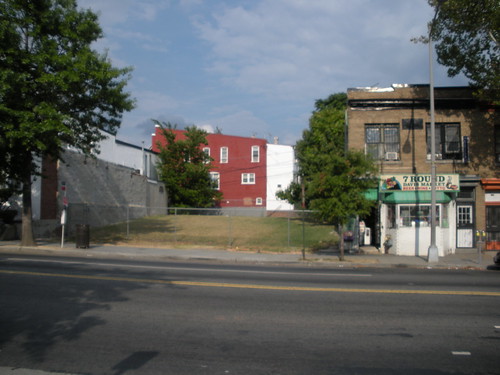 “District of Columbia officials have identified their partners that will oversee a $5 million development project of vacant properties on Georgia Avenue in northwest Washington.

Mayor Adrian M. Fenty said Friday the city is working with Donatelli Development and Mosaic Urban Partners to create retail space and condominiums on the site of three properties, about a block north of the Georgia Avenue-Petworth Metro station.”

I think these are the vacant properties at 3813 and 3825 Georgia Avenue. So here’s some scuttlebutt that I heard. Now keep in mind these projects are not likely to be completed until 2010 but there are still some exciting possibilities that have already emerged.

There has already been interest expressed by the owners of Marvin’s as well as interest from a hardware store that will have a garden center and finally some interest from the owners of Jackie’s in Silver Spring. Pretty exciting possibilities but remember it’s still scuttlebutt at this point…

Now we don’t need to have a debate about more community centers here if you’d like you can re-read that debate. But as for the folks that have been mentioned, which would you rather see – a Marvin’s, Jackie’s or Hardware store with a garden center?

More Stories
“Borf” Building Fades to GrayGood Deal or Not?