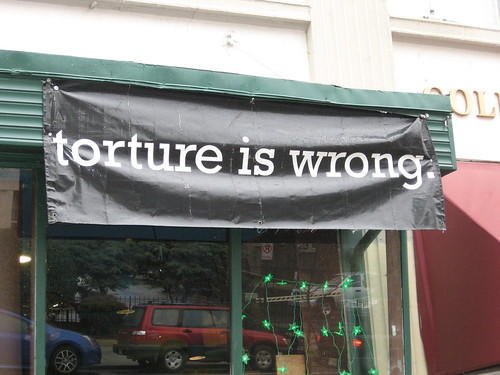 Ed. Note: After an exhaustive search, I have selected four interns to join the Prince of Petworth team. Seriously, I was overwhelmed and am grateful for all those who offered to help. The four interns to join the team come from a variety of backgrounds and neighborhoods. Hopefully most have noticed that the site, despite the name, has significant coverage in addition to Petworth including Columbia Heights, Mt. Pleasant and U Street among others. As such the four interns to join the team reside in, you guessed it, Petworth, Columbia Heights, Mt. Pleasant and U Street. Some wish to remain anonymous and will be referred to as “our intern in Mt. Pleasant” etc. The interns will provide occasional contributions that will develop over time. So without further ado, below you will find a very interesting entry from our intern in Columbia Heights, Karen.

I was taking a stroll down Columbia Road, right around where Mount Pleasant becomes Adams Morgan, and saw this huge sign hanging outside of The Potter’s House. Simple and to-the-point, don’t you think? My immediate reaction was to agree with it, and then I followed that up with a wave of pride in my politically-minded city. But then I got to wondering why I haven’t seen more declarations similar to this one at other venues. Has anyone else seen other political proclamations in or outside of bookstores, eateries, pubs, coffee shops, you name it? If so, does that add to your enjoyment of said venues? (I like my coffee with a side of civil discontent.) Or do such displays discourage or annoy you?

Also, for all those Washingtonians who’ve been around a bit longer, do you see a difference in how the current anti-war movement and the sundry social movements of the 60s have/had been embraced by DC businesses and/or the community at large?