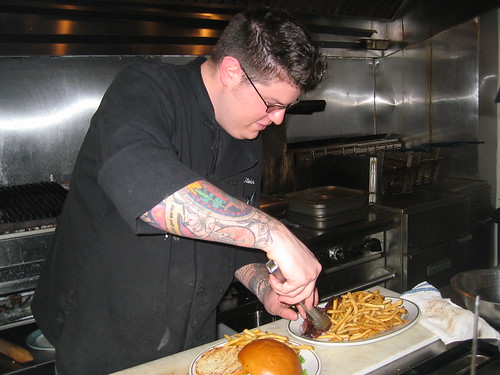 After posting some new items from the Looking Glass Lounge menu I thought it was only fair to speak to the man behind the options, Adam Stein. Stein, 26, grew up in Northern Virginia and went to Antioch College in Ohio. At Antioch he majored in gender studies and ceramic sculpture. It was sculpture that brought him to Rhode Island where he originally concidered getting an MFA from Rhode Island School of Design. Unfortunately, RISD only accepts very few applicants and Stein was not one of them. Which, actually, is great for us. Despite having a studio space for his sculpture in Rhode Island, Stein also began “cooking around a bit”. And by “cooking around” Stein is being quite modest because he became Executive Chef at Nat Porter in Rhode Island. At Nat Porter he used all local produce, protein and the seafood was fresh everyday. The way Stein sees it working in a restaurant has two purposes. First is “feeding the people” and second is “building community”. [Profile continues after the jump.]

Once again misfortune for Stein proves to be fortune for us. Nat Porter closed its doors due to family related issues and Stein decided to return to the DC area where his family still lives and there is an abundance of restaurants. At first he interviewed at Argonaut in the H Street, NE neighborhood but they were not really looking for an executive chef. But while in the H Street neighborhood he met Teddy Folkman, Executive Chef of the great Granville Moore’s and he introduced Stein to Looking Glass Lounge and Wonderland owners Matt and Rose. And when Stein met with Matt they “just hit it off”.

Stein had read the comments to the post I did on the new menu. So he wanted to address the vegetarian issue. Stein, said he was actually a vegetarian himself for five years so he understands the concern. But he wishes to allay those concerns by citing that there will be a house made veggie burger, vegetarian chili made with textured vegetable protein (TVP), vegetarian nachos, vegetarian chili cheese fries, an “awesome grilled cheese made with brie”, salads, and in the future a veggie meatloaf entre and veggie meatloaf sandwich.

Stein uses a local bakery called Lyon Bakery that makes the brioche and other breads. Stein also explained that when people adjust to the new menu he will seek to further incorporate local produce and protein. Future special may also be influenced by what is available locally.

On a note so local tip, Stein also hopes to use his source for mussels and fish that he had previously used from the Boston area. And a bit further away he would like to bring in shrimp “that I used to get from Honolulu”.

When pressed Stein said “I think the Ribs are pretty damn good”. The ribs are smoked and braised in a house bbq sauce. Stein also said “the pork chop is pretty awesome”. It is 14oz and “it is brined in house over night”. He also likes the sashimi grade tuna. The night I spoke with Stein, there was a 10oz steak with frites for 10 bucks which Stein summed up as, you guessed it, “pretty damned good”.

I for one am pretty psyched to try out some of these new options. And that is not just because my oven is broken. I didn’t know how to use my oven even when it worked. Seriously, Stein came off reserved at first but when I spoke to him when he was at work as pictured above – he was in his element. He is super excited about making a connection with the neighborhood and making the neighborhood happy. His ideas for locally grown produce and protein are intriguing. I can’t wait to try some of the new daily specials.