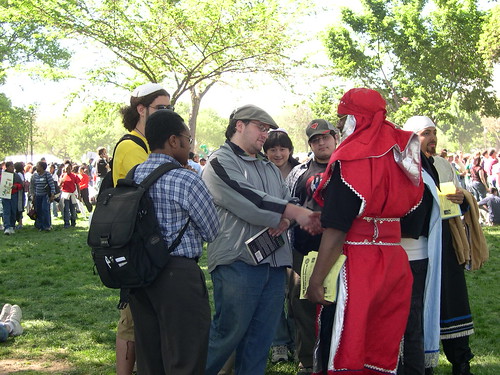 “This is my favorite place in DC. The national mall – where real Jews argue with fake Jews (guess which is which!) about who the real Jews are, while thousands of other people mill about aimlessly, while second tier celebrities encourage them to Save Darfur! or something like that. Note, however, that the two opposing sides agree to disagree about the core issues of the authenticity of the Jewish faith, and are in the process of placing a simple wager on that evenings baseball match. I believe the gentleman in red liked the Nats, but was taking the over/under. Fun things like that really only happen in DC. Meanwhile, the Onion correctly points out that the Darfuri’s lack of awareness of how aware we are of the situation in Darfur.”