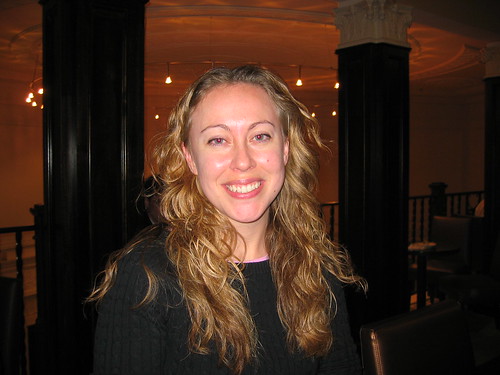 I sat down with Heather, yesterday, at the great Mayorga Cafe in Columbia Heights to discuss her recent experiences purchasing and renovating a row house. Fans of DCist will surely recognize the name Heather Goss. Goss, 28, is the prolific contributor and Managing and Arts Editor for DCist. Originally from southern California, Goss first came to DC in 2002 to attend law school and is currently practicing law in addition to her DCist duties.

At first Heather was doubtful that she could afford to purchase a home in DC. But last Summer, on a lark, she attended a neighbor’s open house and met a very friendly lender. The lender explained the home buying process and Heather then realized she actually could afford a home in the District. Having previously lived in the U Street neighborhood, Heather knew she wanted to stay in that general area, so her search focused on U Street, Shaw, Columbia Heights and Petworth. Remarkably, she found the home she would ultimately purchase on only her second day of looking. It is interesting to note, as an indication of just how much the housing market has changed, Heather looked at 20 to 30 more houses/condos before finally putting in an offer two months after initially looking at the house.

Not owning a car, Heather realized that she wanted to be near a metro and still close enough to walk to work. Additionally, Heather looked at a number of condos and quickly recognized that she wanted the extra space (including outdoor space) that a row house would provide. Furthermore, many of the condos she looked at “looked exactly the same without any character.” Heather looked at many fixer uppers in her price range but other deal breakers included any problems with the roof, plumbing or electricity.

Heather did ultimately purchase a fixer upper and thus chose to go with an FHA loan to finance her home. The FHA construction loan awards extra money for, you guessed it, construction projects. There are some drawbacks to this loan as the interest rate is a bit higher than traditional fixed loans, currently the FHA is at 7.1%. By using the FHA construction loan Heather was able to purchase her home and immediately put in a new heating system which cost $14,000. To put in the new heating system Heather used Polar Bear Air and Heating with whom she was very pleased. (Ed note: I’m happy to relate that Heather chose Polar Bear after getting a second recommendation from the PoP forum.)

Heather’s row house has 2 bedrooms and 11/2 bathrooms. In addition to immediately putting in a new heating system, Heather also had all the floors redone and purchased all new appliances. Longer term projects Heather would like to complete include completely gutting the kitchen and bathroom. Ah the bathroom. Heather explained that upon seeing the bathroom for the first time one of her friends asked if it was Marion Barry’s former bathroom. She explained that the bathroom is “totally ostentatious with a ridiculously gigantic kidney shaped bathtub.” Heather estimates that this bathroom is probably three times the size of a normal bathroom taking up an inordinate amount of space on the second floor.

If It Can Go Wrong It Will Go Wrong

Despite the joys of homeownership there are also many headaches that go along with renovating a fixer upper. In Heather’s case she thought her water heater was good to go but of course the Gods have a peculiar sense of humor and have deprived Heather of hot water. Fortunately for Heather she has befriended the right people. In this case Heather’s friend Nick has been invaluable in trouble shooting the water heater problem. Additionally, Heather needed to replace her back door. After getting a contractor’s estimate for $600 plus the cost of the door, Nick was able to rise to the occasion once again. Heather was able to purchase a door for $180 at Home Depot and have Nick install it all in return for a lunch and beer at Wonderland.

Other challenges Heather has faced include logistics and prioritizing. Heather explained that when you have so many projects to tackle it can sometime be very challenging. For example, when Heather was getting her floors done she had to decide if she was going to expand a closet beforehand or risk ruining the newly finished floors. Other challenges include knowing when to call a contractor or attempt the project on one’s own. Fortunately for Heather she enjoys project management and has been very happy with all of the contractors she has used.

Thoughts on Columbia Heights and the Future

Regarding the house, Heather is very much looking forward to taking advantage of her backyard. As an amateur gardener she can already envision the whole layout of what her garden will look like. She is especially looking forward to having people over for a barbecue when the weather warms up. Heather loves the fact that many of her friends live within a 15 block radius of her new home. She also loves many of the stores and restaurants in Columbia Heights. She is a bit concerned about some of the gigantic development on the horizon i.e. the DC USA project, but is happy that the development will likely increase property values. Heather’s master plan is to sell her house in five years and pay off all of her law school debt so she can focus a bit more on her free lance writing. But Heather notes, “The city can change so much in five years and maybe I’ll want to stay, I love this area so much.”