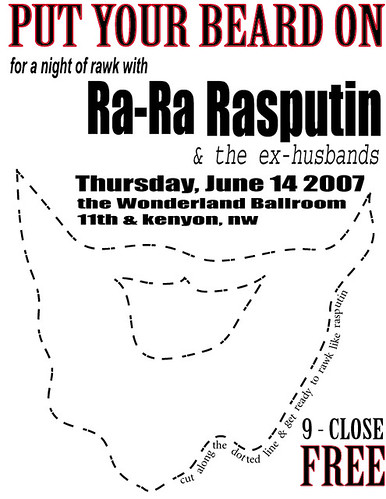 I can’t vouch for the music but it sounds pretty damn cool. A member of the band, Patrick, writes:

Formed in the dismal and rainy spring of 2007, Ra Ra Rasputin refuse to be bound by the conventions and parochial scene standards that have trapped so many groups in a corner. Rather than stick to one style or sound, Anna, Brock, Ken and Patrick are taking a more adventurous path. You know, a little post-punk scratchiness here, some folkie moaning there, a little Afro-Cuban funkiness and just the right hint of pop friendliness. Armed with a keen sense of style and poise, Ra Ra Rasputin hope to remind Washingtonians that seeing a band play is a novel and exciting experience.
Besides, it beats sitting around at another second rate DJ night, doesn’t it?

The Husbands are a punk-folk duo that write songs in the spirit of shoegaze and neo-psychadelic bands of yesteryear. Some similar bands are: Beat Happening, Mazzy Star, Lou Reed and the Velvets, the Primitives, Velocity Girl.
They are Haley Baptiste and Andrew Bucket. Their first E.P is called Shoes and it cost absolutely nothing to record.