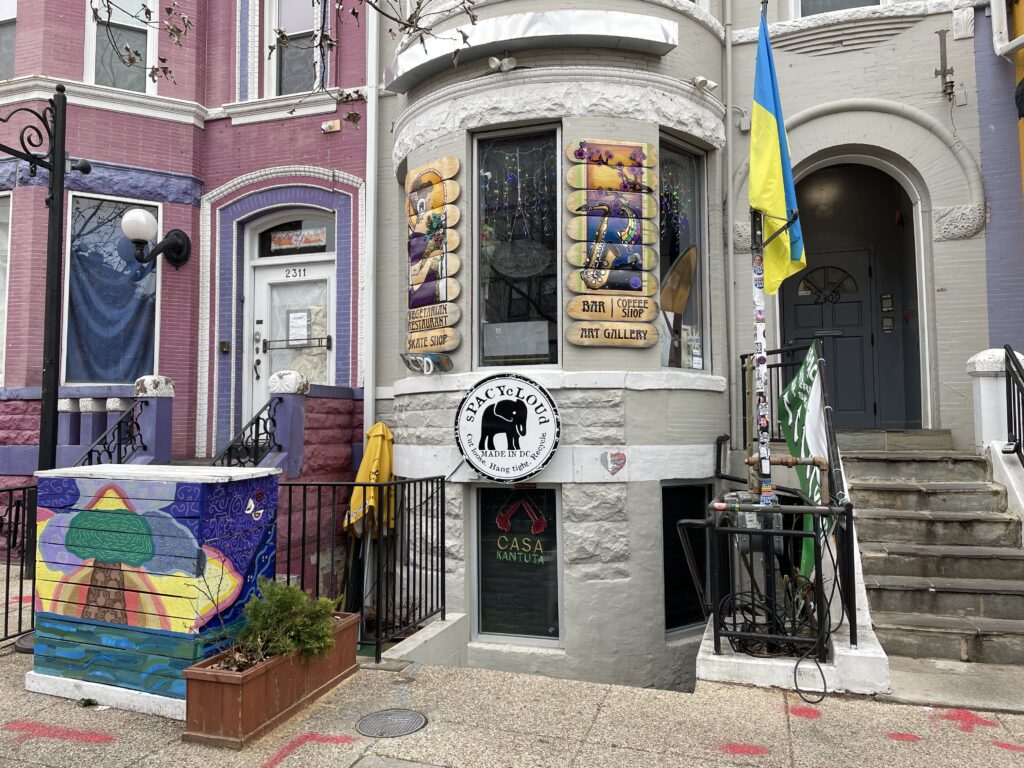 Casa Kantuta is a cultural immersive experience inspired by the Bolivian way of life. It is the brainchild of the Sanchez duo, both of whom immigrated from Bolivia to the Washington D.C. area in the 1990s. Memories of salteñas, a Bolivian street food similar to empanadas, and vibrant celebrations back home collide with the cultural aspects of their formative years spent in the United States to make up this distinctive cocktail spot.

At the center of the Casa Kantuta experience is a menu of traditional Bolivian craft cocktails and drinks inspired by Bolivia and other countries in South America. The drinks are created by bar director, Lou Bernard, who is half Bolivian. 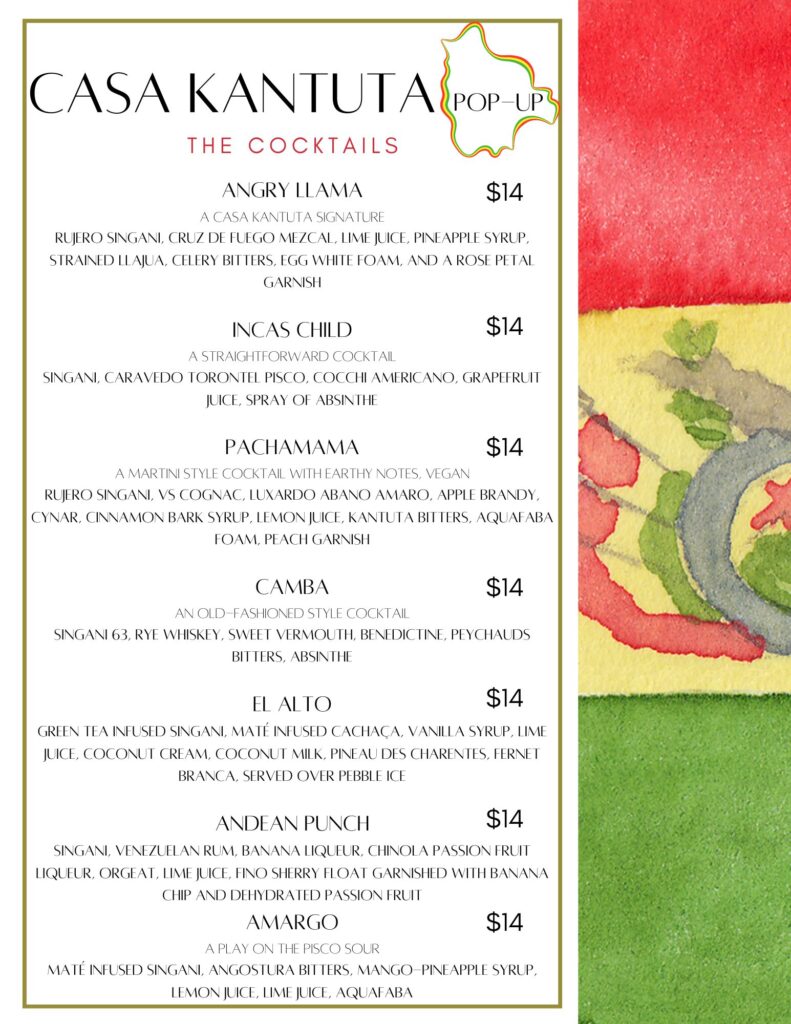 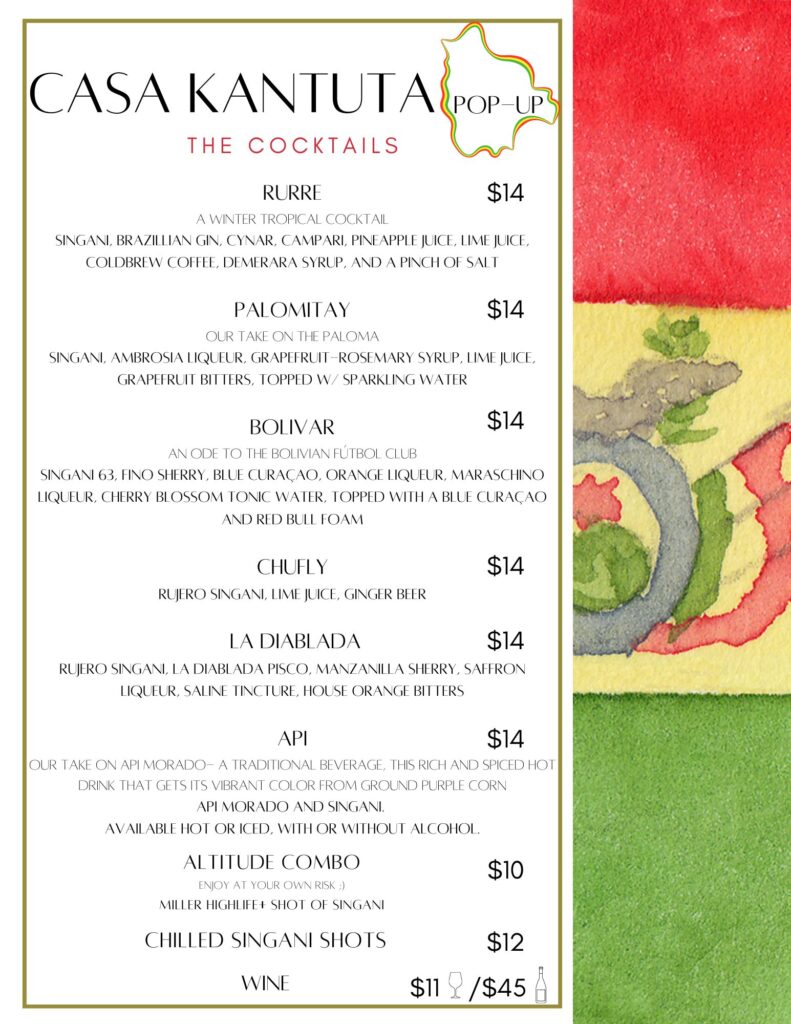 Bernard says, “When Juan and Carla presented the opportunity for me to create a menu based on our heritage, I immediately agreed to be a part of Casa Kantuta. Bolivians love to have a good time and the beverage culture reflects that. I’m thrilled to bring a little taste of what it’s like to everyone who visits us.”

Guests have a selection of fourteen signature drinks to choose from, most of which include Singani, a Bolivian brandy distilled from 200-year-old grape vines and one of Bolivia’s most famous exports. Each featured cocktail spotlights a bit of South American history. For example, Rurre, short for Rurrenabaque, is a winter tropical cocktail named after a small town on the Beni River, that consists of Singani, Brazilian gin, Cynar, Campari, pineapple juice, lime juice, cold brew coffee, Demerara syrup, and a pinch of salt. The drink, a modern version of a Pick Me Up, is brown and green like the Beni River and the surrounding tropical rainforest landscape.

The team has tapped fellow Bolivians and other immigrant and BIPOC-owned businesses to create an inclusive space in its original pop-up location, sPACYcLOUd, a woman and immigrant owned vegan restaurant and skate shop in the heart of Adams Morgan. On some evenings and during weekend brunch, salteñas will be available, provided by local businesses. And mercadito, a market featuring BIPOC-owned small businesses, will also return on special occasions.

After a $50,000 renovation, Casa Kantuta has had the opportunity to make the space more of its own. The previous bar was demolished and replaced by sleek white marble that extends around to a front wall creating optimal space for congregating. Previous guests of the first Casa Kantuta pop-up will recognize “abuela’s living room,” a more cozy sitting area with a loveseat and glimpses of Carla and Juan’s ancestors and ancestral culture. The mantle above the adjacent fireplace displays pictures of Sanchez family members while “Orgullo Boliviano” (“Bolivian Pride”) glows above. In between, a glass top coffee table holds a colorful altar for offerings to the Pachamama (or “Mother Earth”) called challa, a tradition in Bolivia.

The spirit of La Paz is represented in the details of the decor, including a custom-made mural by Alvaro Huayllas, a popular muralist in La Paz, depicting a giant ekeko, a mustached ceramic figurine that represents luck and prosperity. Smaller ekekos are strategically placed throughout the bar as well as cholita accessories like bowler hats, and gold accents that are a nod to Bolivian mines.

“We were so overwhelmed by the reception of our first two pop-ups. We really wanted to step things up and make sure that we showcased our culture with pride. Every piece of art, every mask, even the coverings on our barstools came straight from Bolivia. Creating something that our fellow Bolivians can be proud of, that’s also something every visitor we have can enjoy and learn something from, was really important to my brother and me,” explains Carla. “We have put our hearts, souls, joys, and life experiences from La Paz to D.C. into this space.”

The soundtrack for Casa Kantuta displays the range of those experiences. It is an eclectic mix of music that inspired Juan and Carla as they grew into the thriving young entrepreneurs that they are today: 90s hip-hop, a nod to the siblings’ first few years in the United States, Bolivian music, Reggaeton and Cumbia Villera, a subgenre of Cumbia music that highlights rhythm and folk-dance traditions of Latin America.

Casa Kantuta is now open at 2309 18th Street NW. Hours of operation are as follows:

Tuesday to Thursdays from 5 PM-12 AM

Thanks to Matt for sending: “Cane’s under construction at Union Station!” Godspeed and give this man a raise. You can see Raising Cane’s menu here. Stay tuned for an opening…