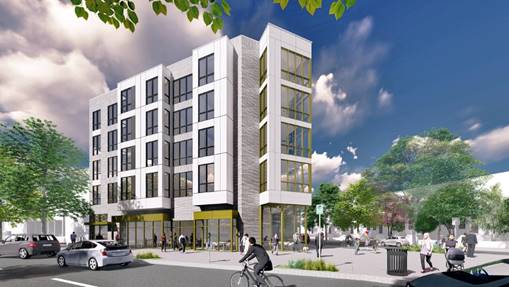 “The first-ever modular apartment building in Washington, DC is taking shape just steps from the Georgia Avenue-Petworth Metro Station. In just eight days, 44 custom designed modular “boxes” shipped from Pennsylvania have been lifted into place by crane to create 16 of Modo’s 17 three-bedroom apartments.

Modo is designed to appeal to the young twenty-somethings of Generation Z.

“The Gen Z market is very environmentally conscious and communal; they generally prefer having roommates to living alone,” said Grant Epstein, President of Community Three. “They are just starting out on their careers and need quality housing at a reasonable cost, but also value great design and useable outdoor space. Modo’s purposeful configuration responds to this need by mitigating the high cost of living in a sought-after ‘A’ neighborhood in DC.” Modo’s site at 3701 New Hampshire Avenue is well-known locally as the former home of Sweet Mango restaurant.

The development team was first intrigued by the idea of modular construction several years ago. “We were looking for more efficient and environmentally-friendly alternatives to typical construction types,” Epstein went on. “Modular construction can reduce construction time by almost one-third, while generating far less onsite construction waste. Construction components typically exposed to the elements – such as windows and wood framing – are built with higher quality because they are assembled indoors. As a result, these modular units offer superior insulation, weather barriers, sound attenuation, and indoor finishes compared with those constructed traditionally.”

“The design is both trendy and environmentally conscious,” noted Dave Yampolsky, Community Three’s Senior Vice President, “including high-efficiency appliances and HVAC for lower utility costs, LED lighting, reclaimed wood flooring, and eco-friendly subway tile.” An automated entry system will allow tenants to use a smartphone app to access both the building and their apartments.

Northpoint Construction, Community Three’s onsite construction team, started building Modo’s concrete-and-steel podium in April. The podium supports the modular apartment units above it. The ground floor indoor space will house the building’s lobby and a 3,000 SF street-level retail space that can provide over 100 outdoor café seats. The lobby will be furnished with a seating area for relaxing, meeting, or remote working.

With the four levels of apartment modules now in place, construction has begun on the building’s green roof deck with seating and grilling areas. A single penthouse apartment with a private outdoor terrace also is being built on the roof level.

“The decision to use modular construction was not undertaken lightly,” Epstein explained. “It took more than a year of analysis requiring acute attention and extensive understanding of new processes. Working closely with the District of Columbia government to coordinate an inspections process for this type of construction was paramount.”

Urban Pace will begin pre-leasing the apartments in March, 2021. Project financing has been provided by EagleBank.”