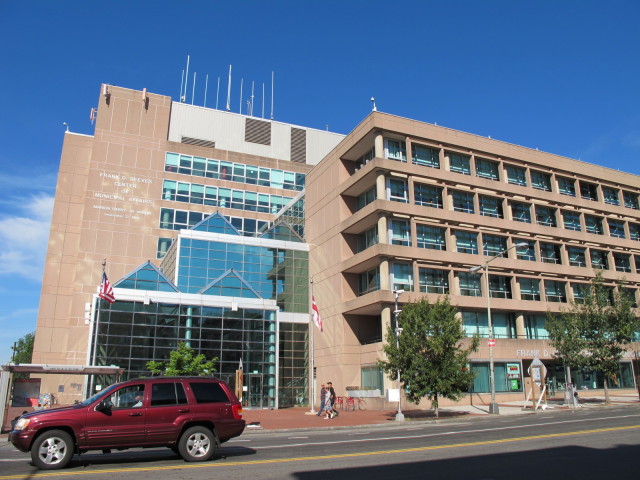 Reeves Center at 14th and U Street, NW

“Mayor Muriel Bowser announced that National Association for the Advancement of Colored People (NAACP) has signed a letter of intent with the District to move their national headquarters to Washington, DC within the future redevelopment of the Frank D. Reeves Center of Municipal Affairs at 2000 14th Street NW.

“The Reeves Center stands in an iconic and culturally significant area of the U Street corridor with deep connections to the NAACP,” said Mayor Bowser. “As we continue fighting for change and working to build a more fair and just nation, we look forward to welcoming this iconic civil rights organization to Washington, DC.”

Founded in 1909, the NAACP is America’s premier and largest civil rights organization. Through its Washington, DC bureau, the NAACP helped to advance not only integration of the United States Armed Forces in 1948 but also passage of the Civil Rights Acts of 1957, 1964, and 1968 and the Voting Rights Act of 1965.

“Washington, DC, sits at the epicenter of change. This exceptional opportunity to bring our national headquarters to DC will allow us to be even more proactive in serving the Black community, and confronting the serious challenges facing the nation,” said Derrick Johnson, President and CEO of the NAACP. “This development venture will fuel the reinvigoration of the NAACP envisioned three years ago. As we have witnessed over the last month, our country is on the cusp of real change that is long overdue. A new home in Washington will allow us to not only fully participate in the growth of this great city, but to also amplify the voices of the Black people as we fight for the crucial policy changes and economic empowerment needed in communities across the country.”

The District, through the Office of the Deputy Mayor for Planning and Economic Development (DMPED), plans to redevelop the Reeves Center, through a solicitation to be issued this year, into a transit-oriented, mixed-use development with office space, affordable housing, and neighborhood serving amenities in a way that reflects the site’s historic and cultural significance.

“The inclusion of this national institution, the NAACP, as a foundational partner in the Reeves Center redevelopment sets a cultural and historic intention that will serve the neighborhood and Washington, DC for years to come. We look forward to this partnership to bring the NAACP to the U St neighborhood,” said John Falcicchio, Acting Deputy Mayor for Planning and Economic Development.

Franklin D. Reeves (1916-1973) for whom the Frank D. Reeves Center of Municipal Affairs was named when it opened in 1986, was a lawyer and civil rights activist who, while working for the NAACP, was part of the team that shaped the landmark case of Brown v. Board of Education that rendered segregated schools unconstitutional and mandated school desegregation throughout the United States.

In the 1980s, Mayor Marion Barry Jr. (1936-2014), former president of his NAACP campus chapter at LeMoyne-Owens College and later founder of the NAACP campus chapter at Fisk University, commissioned the District’s investment in the construction of the Frank D. Reeves Center of Municipal Affairs to jumpstart development and revitalize the neighborhood. As the direct result of Mayor Barry’s vision and activism, today, the area is one of the District’s most flourishing destinations.”

Read more →
More Stories
“Seating in the Sidewalk?”Today’s Rental was chosen for the, uh, well, do scroll through all the photos, you can’t miss it