Get our email!
Search
Chinatown 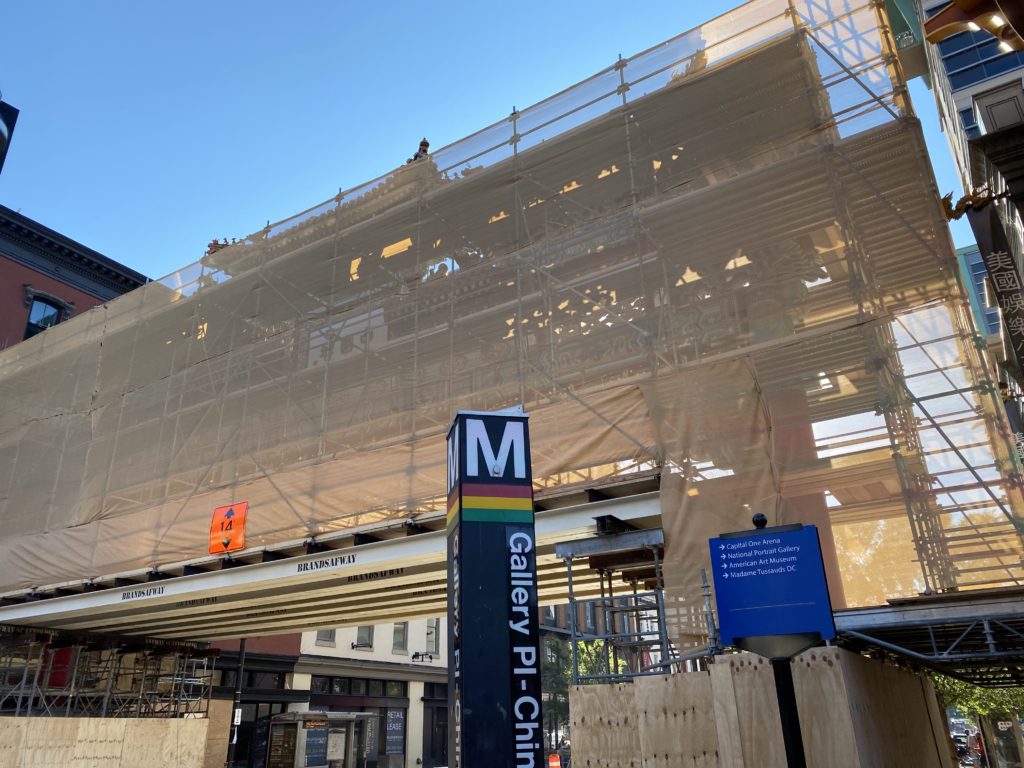 Any idea what work is going on with the Arch (not sure if it is just a quick paint job or a full renovation?) and when it is going to end? Saw this today, and I don’t remember seeing it before.”

“Mayor Muriel Bowser announced that the District will begin conservation work on the iconic Friendship Archway, located at 7th and H Streets NW in historic Chinatown, starting on Monday, June 15, 2020.

The multi-agency effort is led by the DC Commission on the Arts and Humanities (CAH), working in partnership with the Mayor’s Office on Asian and Pacific Islander Affairs (MOAPIA), the Department of General Services (DGS), the District Department of Transportation (DDOT), and the Washington Metropolitan Area Regional Transit Authority (WMATA).

“Art has the power to teach all of us,” said Heran Sereke-Brhan, Acting Director for the CAH. “We believe that in conserving the Friendship Archway’s beauty and majesty, all District residents and visitors will be able to come to a greater appreciation of the history and culture it represents.”

“The Department of General Services is honored to have a contributing and collaborative role in the restoration of the historic Chinatown Friendship Archway, visited by many the world over,” said DGS Director Keith A. Anderson. “Through our Capital Construction Services Division, we will assist with the general oversight of the project and ensure that scaffolding surrounding the structure is sound so that artists can safely perform this important work.”

Designed by local architect Alfred Liu, the Friendship Archway was dedicated in 1986 to commemorate the newly-established sister cities relationship between the District of Columbia and Beijing, China. Since that time, only one restoration of the structure occurred in 2009 and the archway is now in need of repair to restore cracking, loose tiles, non-functioning light sources, peeled paint, and overall cleaning. Liu and his company will be the primary contractor for this summer’s conservation work.

“The Friendship Archway remains an enduring and unforgettable symbol of our District’s ever-evolving Asian American and Pacific Islander community, and today’s announcement is a testament to our DC values of embracing and cherishing such diversity,” said MOAPIA Executive Director Ben de Guzman.

Throughout the summer conservation process, the partner agencies will use the opportunity to engage with the public on the artistic techniques involved in creating the archway, as well as the history of the Chinatown neighborhood and the District’s Asian American population.

“The DDOT team is proud to support the restoration of the iconic Friendship Archway, which inspired the city’s first in-street public art installation at one of the District’s most visited intersections, 7th and H Streets NW,” said DDOT Director Jeff Marootian. “This has been a collaborative effort both within DDOT and with our partners to ensure that all users of the roadway remain safe during the restoration of the Friendship Archway.”

The conservation project is expected to be completed by October 2020.”

Read more →
More Stories
“Any update from those who went to gyms last/this week?” “Info on Outdoor Exercise Classes?”Random Reader Rant and/or Revel