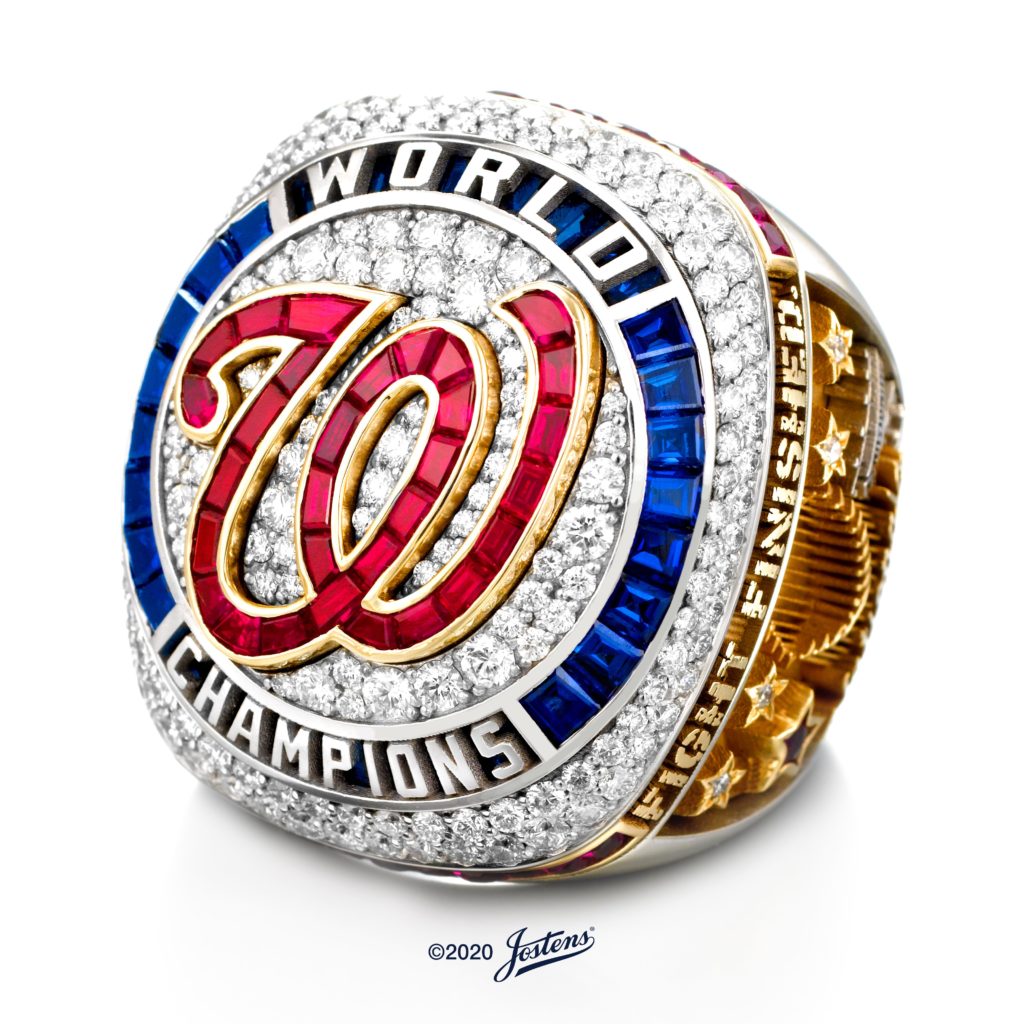 And they are magnificent.

“The journey the Nationals took to become World Series Champions for the first time was incredible,” said Chris Poitras VP and COO of Jostens Professional Sports Division. “We had the absolute honor to partner with them to create a ring that celebrated not only this historic moment for the franchise, but also paid tribute to the nation’s capital and the city the Nationals call home. This ring brings together years of tradition with cutting edge technology, the Nationals ring is truly a piece fit for World Champions.”

The Washington Nationals made Major League Baseball history by winning their first-ever World Series Championship on October 30, 2019, defeating the Houston Astros in game 7.

Crafted in 14-karat white and yellow gold, the Washington Nationals 2019 World Series Championship Ring celebrates the incredible accomplishment in a fitting tribute to the franchise, their fans, and Washington, DC.
The top of the ring features the team’s iconic “W” logo, made from 30 custom-cut genuine rubies, representing the 30 runs the team scored in the four World Series games in which they were victorious. Surrounding the logo are 58 pavé-set diamonds. Above and below the logo are the words WORLD CHAMPIONS set over the ring of 32 custom-cut genuine sapphires. This number represents the sum total of the team’s 2019 walk-off wins (7), shutout wins (13), longest winning streak (8 games), and playoff rounds won (4). An additional 108 diamonds are featured along the ring top, representing the number of regular season and Postseason wins (105), plus one diamond for the World Series Championship, and an additional two diamonds as a nod to the duality of franchise history as the Montréal Expos and the Washington Nationals. The top and bottom edges of the ring top each feature 12 princess-cut rubies, representing the total number of Postseason wins.

On the left side of the ring in yellow gold is the player’s name in a bold, distinctive font. Beneath the player name, also in yellow gold, is the nation’s majestically-waving flag, along with the 2019 championship year date. In the foreground, in beautifully contrasting white gold, are some of Washington, DC’s most iconic buildings and monuments. Included in this stunning, intricate detail, housed within the Capitol Building, are the Roman numerals MMVI, representing 2006 – the year in which the Lerner family purchased the franchise. The bottom of the ring’s left side serves to display the player’s number, set in diamonds.

An evolution of the Nationals Postseason motto of, STAY IN THE FIGHT, the right side of the ring features the motto modified as, FIGHT FINISHED. Below, the stripes of the American flag fill the sky above Nationals Park behind the coveted Commissioner’s Trophy, complete with the Nationals wordmark logo. Also appearing on the right side are four diamonds set upon a star base, as well as a custom-cut, star-shaped ruby. The five stars represent the incredible five elimination games won by the Nationals in the Postseason on their journey to become champions. The four diamonds on the stars represent the four previous National League East titles earned by the Nationals, while the red star signifies their World Series Championship.

The interior arbor is engraved with a unique shark symbol holding a yellow gold trophy, in honor of outfielder Gerardo Parra’s walk-up song, “Baby Shark,” which took over Nationals Park every time Parra stepped to the plate. Also featured here are the team logos of each of the opponents the Nationals defeated during their Postseason journey, along with each series score. Rounding off the arbor engraving is the championship year date of 10.30.19 – the date the Nationals immortalized themselves as world champions. The team’s mantra of GO 1-0 EVERY DAY, appears along the ring palm.

Jostens also partnered with the Washington Nationals in producing a World Championship jewelry collection allowing the entire fan community to commemorate the 2019 World Series victory. Nationals fans can capture their piece of the World Series Championship and commemorate this exciting time in franchise history through a custom selection of personalized fine jewelry and championship collectables. All pieces in this collection are inspired by the team’s Championship Ring and are available now for a limited time by ordering online at www.jostens.com/nationals.

As a part of the exciting World Series celebration, the Washington Nationals have created a unique opportunity that extends the championship to the fan community. As a part of their program, a Limited Edition Ring is being made available and is designed to be as close to the ring awarded to the team that is made available for purchase to the public. The Limited Edition Ring is available online at www.jostens.com/nationals.” 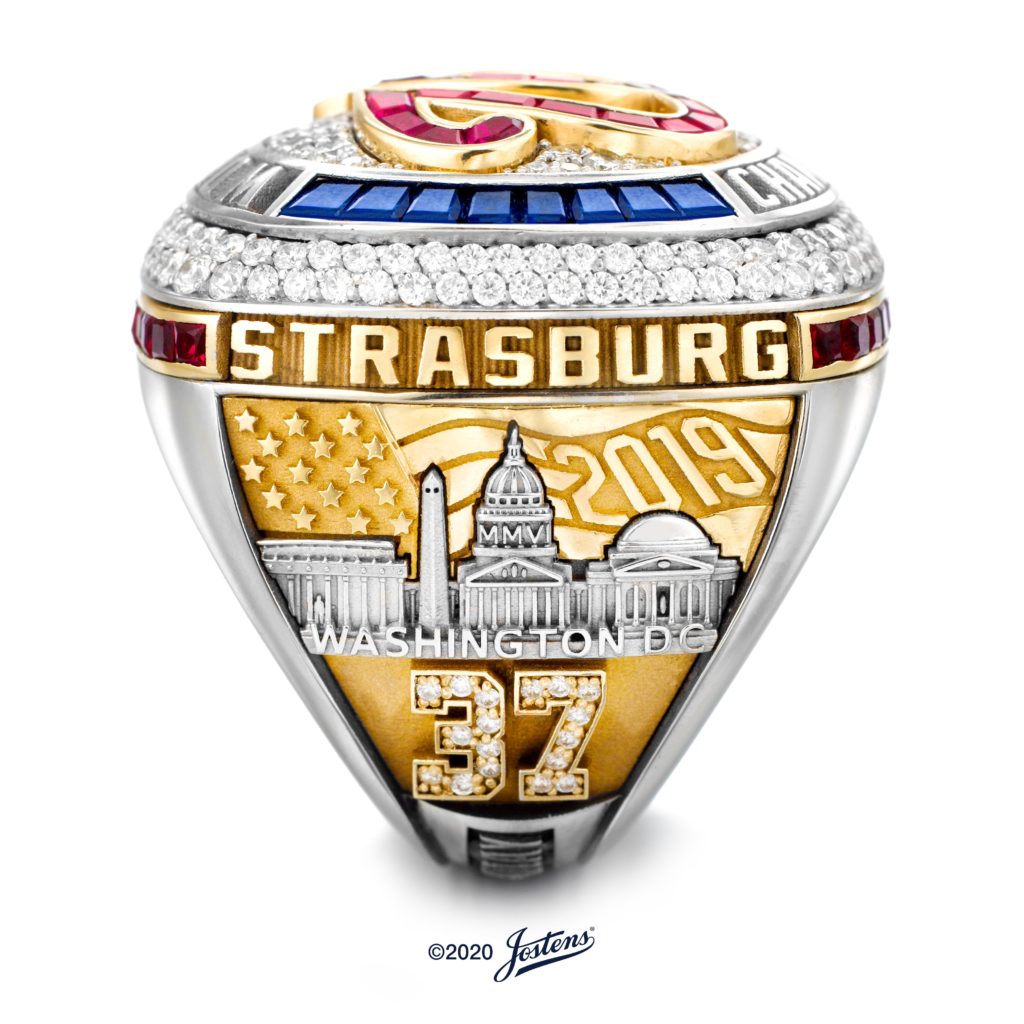 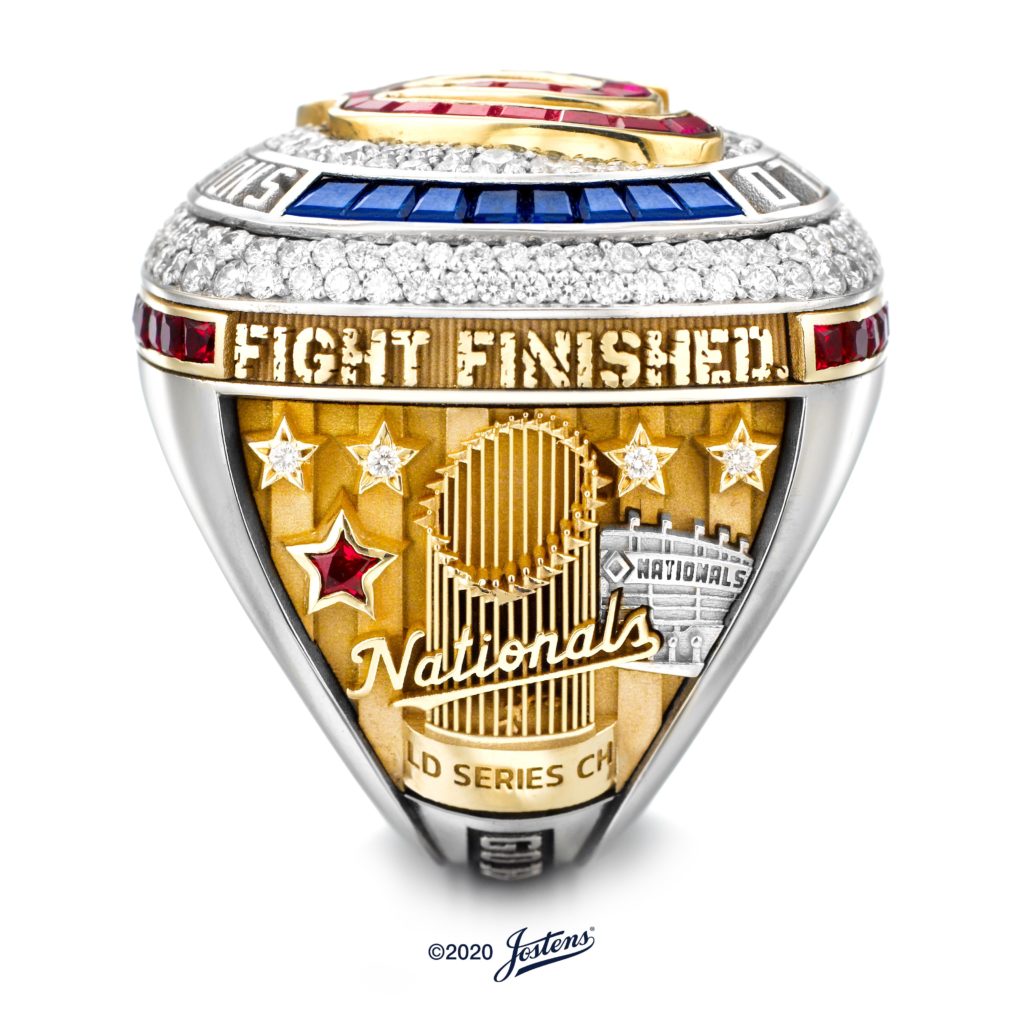 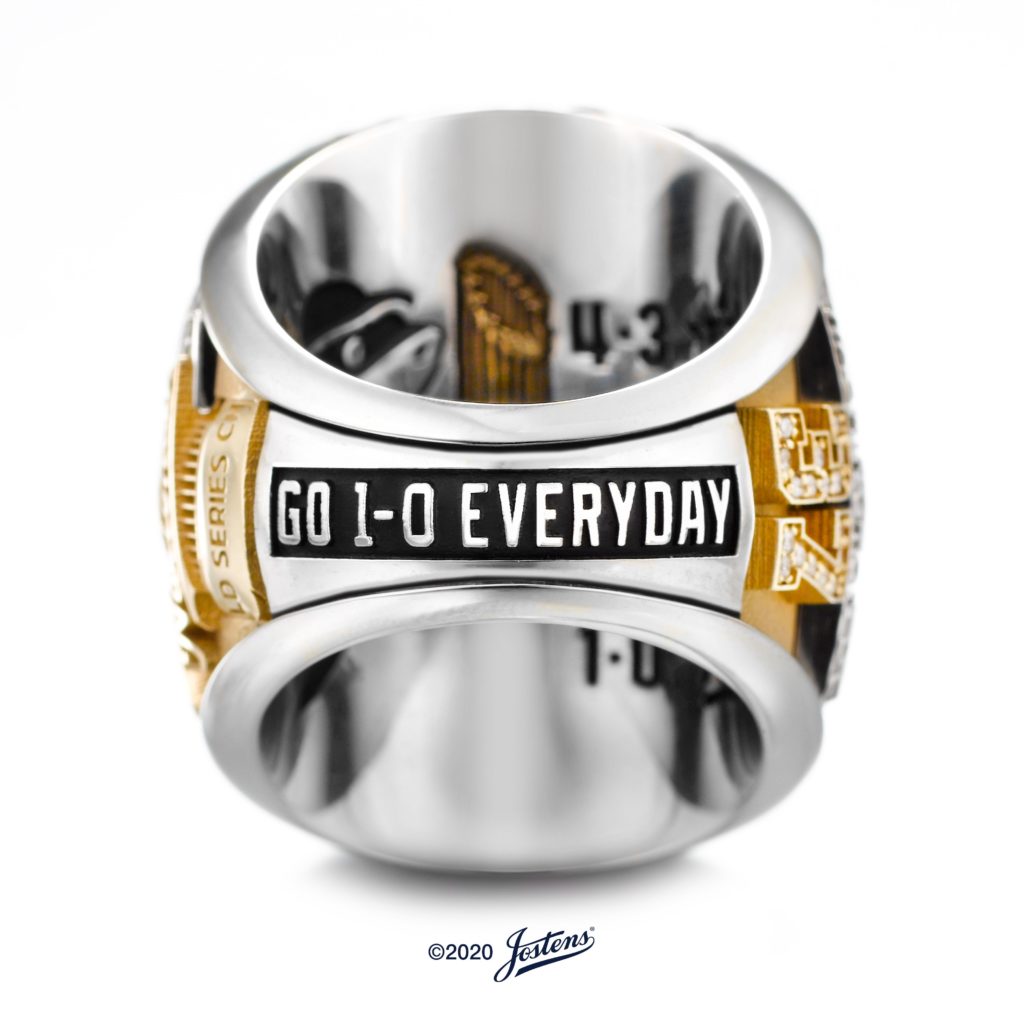 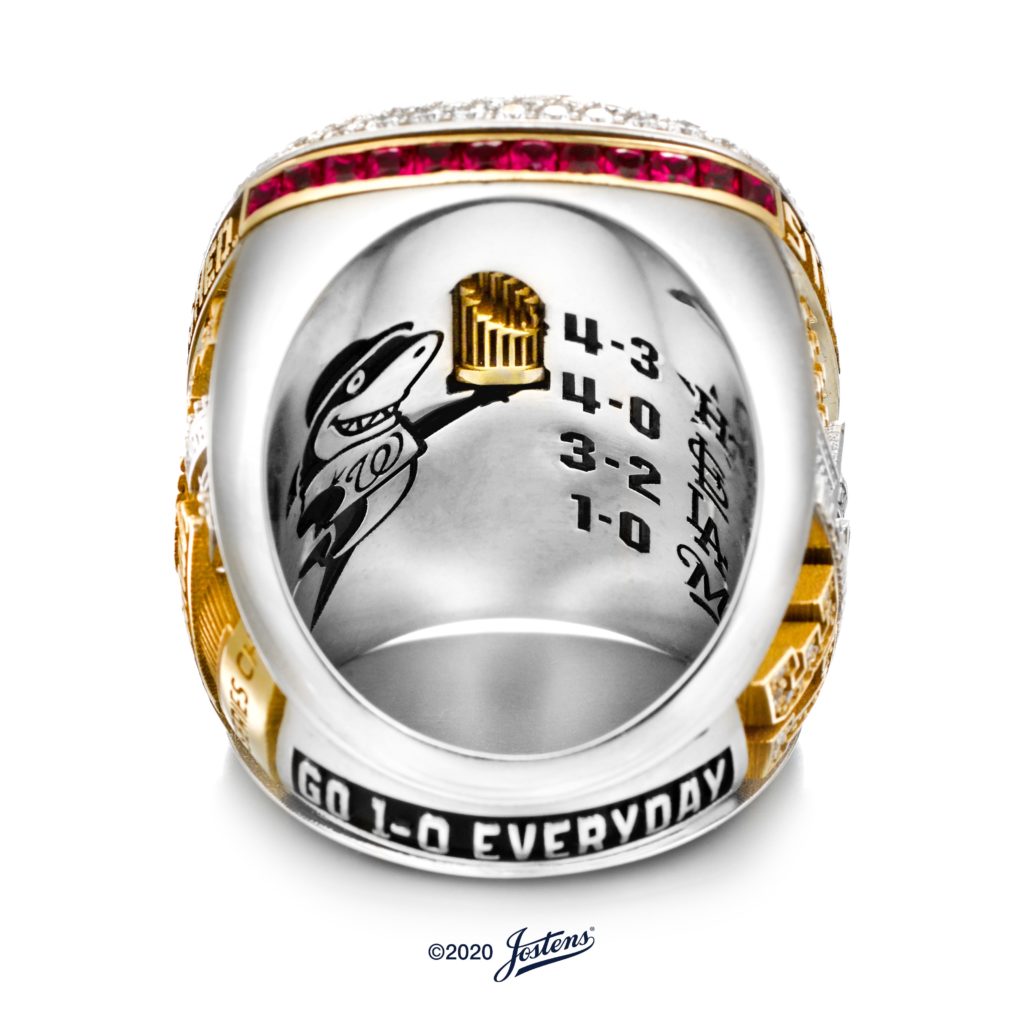 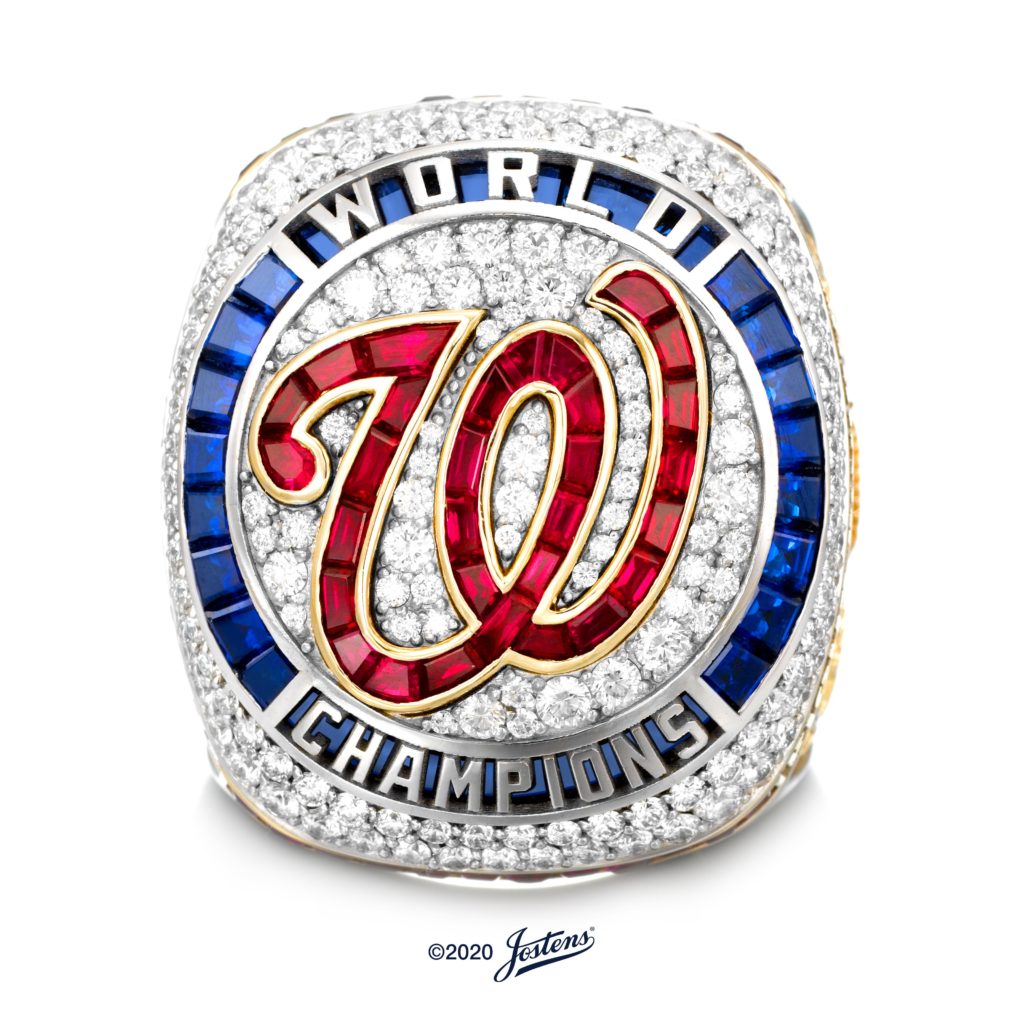