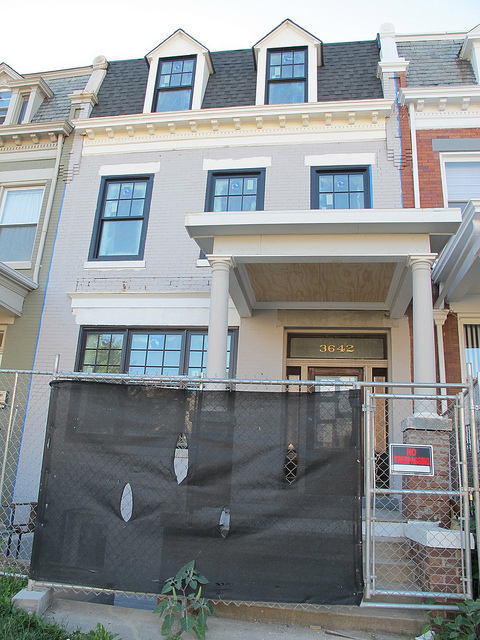 I’m a new DC resident and love, love, love my new neighborhood (16th St heights) and especially love the townhouse architecture (I’m from Oregon where row houses absolutely do not exist). But since I have moved here I have seen not one, not two, but THREE houses flipped, gutted, painted some variation of grey with black trim windows, black modern railing, and the SAME MODERN LIGHT FIXTURE in the “open concept” kitchen in a block radius from our house. They just started work on a fourth around the corner. What is this all about??

Is there a house flipping monopoly with only one architect who out of the sheer madness of the volume of houses flipped has just said “just do them all the same I just want a couple of hours of sleep for God’s sake!!”? Is there an obscure ordinance that forbids rooms and walls on the first level of row houses during remodel? Did the least creative HGTV show and gentrification have a love child? I have lived all over the country and never before have I seen such a thing. Who are these people, how many of them are there, and what do they have against walls?”

More Stories
Your Afternoon Animal Fix“To our loyal and wonderful guests, we are happy to announce that, we will be re-opening for take out”