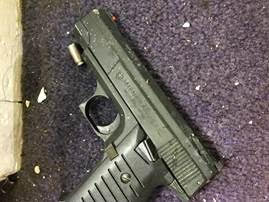 “Agents from the Metropolitan Police Department’s (MPD) Internal Affairs Bureau are investigating an officer involved shooting that occurred on Sunday, December 29, 2019, in the 100 block of 36th Street, Northeast.

At approximately 4:39 pm, members of the Seventh District Crime Suppression Team were executing a search warrant in reference to a Carrying a Pistol Without a License offense, at a residence, at the listed location. As officers entered the residence, they encountered an armed suspect. There was an exchange of gunfire between the suspect and the officers. The suspect then barricaded himself within the residence. One officer was struck in their vest and sustained non-life threatening injuries. The suspect sustained non-life threatening gunshot wounds. Both the officer and suspect were transported to an area hospital for treatment.

Arrested in this case is 43 year-old Diantre Smith, of Northeast, DC, for Assault on a Police Officer while Armed and Felon in Possession of a Firearm.

The officers involved have been placed on administrative leave, pursuant to MPD policy. Officers activated their body worn cameras. That footage is currently under review.

A handgun was recovered on the scene and is pictured above.

Read more →
More Stories
Your Afternoon Animal Fix“What are the bars that folks in the ‘older’ set frequent?”