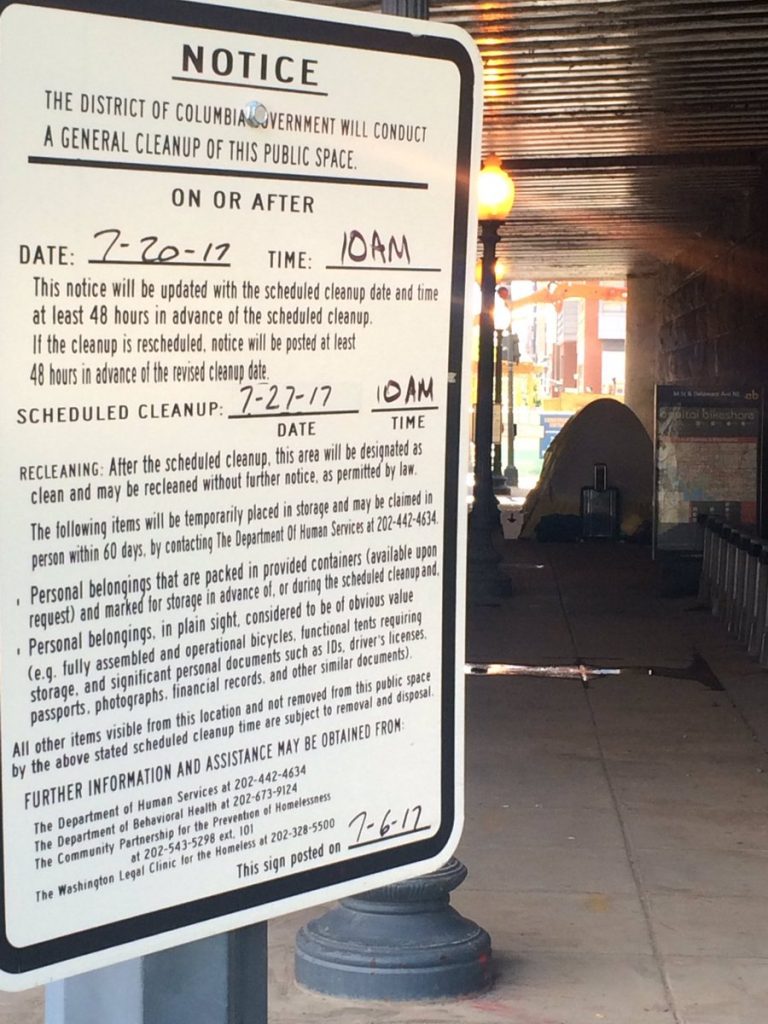 This is an open letter the NoMa BID just released on the homeless encampments under the passway. TLDR it is pretty much a call to action on public to contact DC Gov for help on this issue after attempts by NoMA BID.

In light of the discussion on the Columbia Heights Plaza I’d be curious on PoPulace feedback to NoMa situation. Unlike Columbia Heights, NoMa has a BID that has tried for years to address the issue of the homeless encampment with their resources and funds. As a NoMa office worker I see the NoMa BID street team cleaning the underpass between the scheduled cleanings that DC DPW (?) handles on top of their daily work to keep the NoMA streets and public spaces clean.

If an organization like NoMA BID that has the manpower, resources, funds, and presumably connections with DC Govt can’t grapple this issue what hope do we have for Columbia Heights that doesn’t have help in the form of BID and what will it take to address & at least alleviate/improve this issue in the short term.”

Full letter from the Noma BID:

The NoMa BID wishes to share publicly the sentiment expressed in an increasing volume of complaints we are receiving from neighbors in NoMa: Namely, that conditions are worsening at the encampments in the underpasses and on First Street NE, and that people are worried about their ability to safely traverse these public spaces. Many report that they have been harassed as they walk by the tent encampments, where people frequently engage in aggressive panhandling and occasionally menace passersby. Used and bloody hypodermic needles and other drug paraphernalia, rotting food, trash, broken glass, public nudity, prostitution, sales of illegal drugs, and human urine and feces are encountered by those whose routes take them by the encampments and pervade the space in which encamped individuals are living.

While we appreciate the efforts of the Office of the Deputy Mayor for Health and Human Services (DMHHS), the agency’s ongoing biweekly encampment engagements have not improved the unsafe and unsanitary environments that affect NoMa residents, workers, and visitors attempting to get around the neighborhood and take care of their daily needs. It is essential that something be done to recognize and protect the right of D.C. residents, workers, and visitors to safely use and pass through public space in NoMa.

For the more than 100,000 people out in the NoMa neighborhood on a typical day, NoMa’s underpasses are the only east-west paths for traveling from one side of the neighborhood to the other. These underpasses and many sidewalks in NoMa are quite narrow, especially those at K Street NE, Florida Avenue NE, and First Street NE near Union Station. These sidewalks support a great amount of pedestrian traffic traveling to office buildings with many thousands of workers, the Union Station transit hub and Metro stations, essential neighborhood services, and rowhomes and residential buildings. Yet they are unique in their limited width, and they lack access to adjacent spaces that can serve as refuge, such as a store or building setback. If a pedestrian or bicyclist is confronted by an unsafe condition in an underpass, there is no way to avoid it without subjecting oneself to the risk of being struck by a vehicle traveling in the road.

The NoMa BID is deeply troubled by the fact that pedestrian residents, workers, and visitors — including people with disabilities and parents pushing strollers — are being forced into the roadbed to get through the streets of NoMa. To that end, we have asked the District government to demonstrate its concern for the rights of all NoMa community members.

One recommendation we have put forward is a request to put in place pedestrian safe-passage zones. The creation of such zones would require the establishment of minimum clear sidewalk widths for busy commercial zones like the core of NoMa and would create appropriate procedures for immediately removing tents and other personal property obstructing a sidewalk. There may be other solutions that protect the rights of residents, workers, and visitors to safe passage through public space, and the NoMa BID would be interested in exploring any such options.

We applaud the initiatives of the District of Columbia government to increase affordable housing and improve shelter options. However, after years of engagement with scores of individuals encamped in NoMa and documentation of conditions and incidents associated with encampments, we know that the primary challenges are the result of mental health and substance-abuse disorders. Such disorders are often the issues that cause people to choose to live on the street rather than stay in their housing or accept shelter. Well-intentioned advocacy that conflates the problems experienced by encamped individuals only with housing affordability is misguided. This is not to say that housing affordability, in general, is not an issue, but that housing alone, no matter how much is built, simply will not solve the encampment issues.

Various factors have constrained dialogue and government responses to the encampments. The first is the fact that public dialogue around “solutions” has focused almost exclusively on the provision of more affordable housing. Another challenge is legal efforts focused on protecting the rights of encamped individuals to keep property in public space. We believe encamped individuals would benefit far more from improved drug rehabilitation and other mental-health programs, and better enforcement of the laws prohibiting drug use and sale, than they do from advocacy in connection with their ability to remain in these unsafe and unsanitary conditions.

Finally, the views of ordinary residents, workers, and visitors have not been widely heard on these issues. There are many people whose passion for improving the housing situation and protecting what they think should be the legal rights of encamped individuals is a calling or a career. But there is no similar advocacy group devoted to making sure that people can safely pass through public spaces.

The NoMa BID has worked tirelessly and to the best of its ability, using the limited resources we have, to assist with outreach, provide employment, share information about service availability, provide counselors to educate encamped individuals about harm reduction, and educate community members about the dangers to encamped individuals during hypothermia season and how they can help keep those individuals safe during the winter. The NoMa BID must also, however, advocate for the needs of community members who are not illegally encamped on public sidewalks. The NoMa BID Clean Team and Hospitality Ambassadors work hard every day to try to keep streets and underpasses clean and safe for residents, workers, and visitors, but under the current conditions, this has proved impossible.

If you are interested in sharing your views and/or experiences in connection with encampments in public space in NoMa, we recommend that you contact the Executive Office of the Mayor at [email protected], Deputy Mayor for Health and Human Services Wayne Turnage at [email protected], and Ward 6 Councilmember Charles Allen at [email protected]. If you are threatened, observe illegal activity (including aggressive panhandling), or see someone in trouble, call 911 immediately. Reporting incidents to 911 is essential to current and future community safety.

Finally, please feel free to reach out to the NoMa BID at [email protected] with any questions or comments.

Read more →
More Stories
Your Afternoon Animal Fix“following a weekend fire at 708 Kennedy Street NW in which two residents died, including a nine-year-old boy, Mayor Muriel Bowser announced that the District would be referring the matter to the DC Office of the Attorney General and the United States Attorney’s Office”