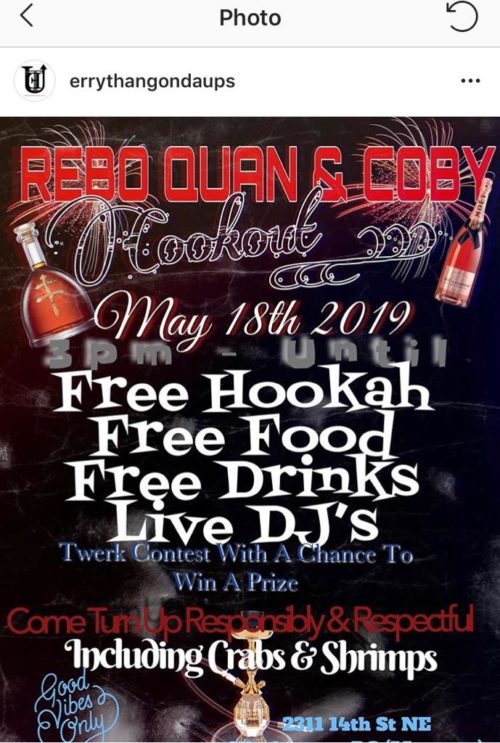 The Fifth District is investigating a shooting that occurred on Sunday, May 19, 2019 at approximately 12:54 AM at the Brentwood Recreation Center, located in the 2300 block of 14th Street, NE.

Members of the Fifth District were on patrol in the area and heard numerous sounds of gunshots. Upon responding to the scene, the members observed dozens of people running from the scene in a panicked state. One juvenile male victim was subsequently found in the 2300 block of 15th Street, NE, suffering from a gunshot wound. The victim was transported to an area hospital for treatment of non life-threatening injuries at this time.

Upwards of 25 cartridge casings were recovered from the scene. I have attached a flier to this email for an unlicensed event that was announced to take place at the Recreation Center. Upon becoming aware of this event, MPD and the Fifth District took immediate action to prevent the unlawful gathering from taking place. Unfortunately, MPD’s efforts were not supported by the Department of Parks and Recreation, who ultimately made the decision to allow the event to take place, despite MPD’s objections.

The Fifth District supports the peaceful use of these recreation centers for and by the youth of our communities and their families.”

Next
“Streamers across Soapstone Creek”