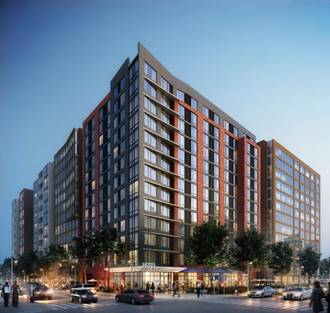 Projected to open in the fourth quarter of 2020, the 14-story hotel will be located at 317 K Street, NW on the northeast corner of 4th and K.

This site is just three blocks east of the highly anticipated downtown Apple Store in the historic Carnegie Library, scheduled to open this week, as well as the Walter E. Washington Convention Center.

BBGM Architects of Washington, DC, which designed the new Intercontinental Washington DC – The Wharf, is the project architect. Urgo Hotels & Resorts of Bethesda, MD will operate the property, which will feature penthouse-level meeting rooms. Kinsley Construction, Inc. is the general contractor.

Sequar announced plans for a hotel on the site, to be called Lima, in 2015. The original plan was for 200 hotel rooms with 30 apartments on the upper floors. A 2016 change in zoning regulations allowed 100 percent hotel use. A small commercial building and auto body shop on the site will be demolished shortly.

The Mount Vernon Triangle neighborhood now has over 4,500 residential units, 1.8 million square feet of office space, and 272,000 SF of retail space. Another million SF of office space, 574 apartments, and 127,438 SF of retail are either under construction or in the development pipeline. The new Holiday Inn Express and other planned hospitality construction are slated to bring more than 1,000 hotel rooms to the neighborhood.”

More Stories
Denizens Brewing Co. Opens Second Location in Riverdale Park, MD (May 25th)“Part of it fell into the sidewalk and there were tons of emergency responders.”