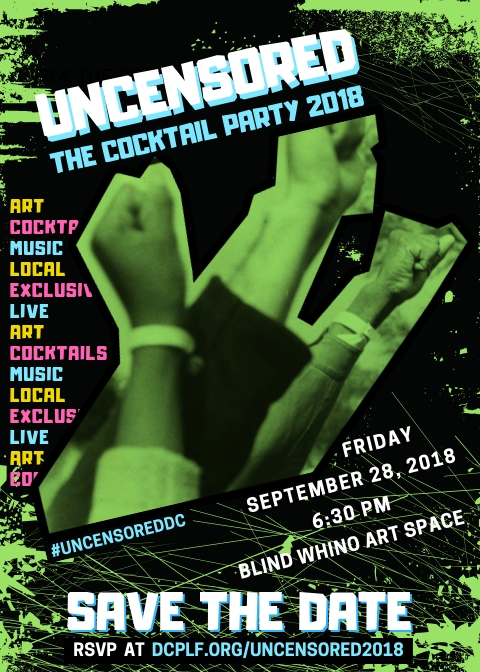 “We live in a world where the censorship of ideas, the manipulation of facts and the distortion of truth compromise our ability to make sense of our times,” said Richard Reyes-Gavilan, the executive director of the DC Public Library. “Books, fiction and non-fiction alike, have long been an effective and crucial tool for exposing injustice. Protecting the freedom of expression, the freedom to read and the freedom to espouse unpopular opinions has never been more important.”

From September 4 to September 30, copies of six books will be hidden around the District at libraries, coffee shops, museums, bookstores and bars. The titles include “The Hate U Give” by Angie Thomas, “Persepolis” by Marjane Satrapi, “March: Book One” by Congressman John Lewis and “Yaqui Delgado Wants to Kick Your Ass” by Meg Medina. Each book will have a special edition cover with the text, “I write to represent…” and spine artwork. Hunters who collect all six books will discover a composite design.

Scavenger Hunt clues will be read on WAMU Radio during “Morning Edition” and shared on the DC Public Library and the DC Public Library Foundation’s social media accounts. People who find the books post a photo of the book they found – or themselves with the book – with the hashtag #UncensoredDC. They are then eligible to win a variety of raffle prizes, including a voucher for two tickets to a Politics & Prose ticketed event; a non-alcoholic gift bag from DC Brau and a gift card and bag of coffee from Compass Coffee. Many locations will have several copies of a book. Participants who share tips on where the books might be hidden on social media with the hashtag #hottips will receive special raffle prizes that include an overnight “Staycation” at The LINE hotel and a gift certificate for two to Columbia Room.

On September 5 DCPLF will host a “Teen Night” at Blind Whino Art Space (700 Delaware Street SW). The evening will feature a special installation of The Hunger Wall Poster Project, a poster series inspired by multiethnic, multiracial activism of the Poor People’s Campaign in 1968. Posters created by local activist artists w Nando Aģlvarez, Adrienne Gaither, Monolith and Justin Poppe (co-founders of of 411 Collective) will be on display along with installations of original artwork by Omolara Williams McCallister and Yaya Bey in collaboration with Adrienne Gaither, Tsedaye Makonnen, and poster workshop participants at Anacostia Library and Parklands-Turner Library. A community wall will feature posters produced by program participants throughout Spring and Summer 2018. The Hunger Wall Teen Poster workshops were sponsored by PepsiCo.

The celebration of Banned Books Week will culminate with UNCENSORED: The Cocktail Party – an annual fundraising event benefiting DCPLF. UNCENSORED will also take place on Friday, September 28th at Blind Whino (700 Delaware Ave, SW) and feature signature cocktails from some of the city’s best bartenders, representing their favorite banned books as well as live music from local bands and a pop-up market featuring exclusive items.“

more stories
Previous
UPDATE: Confirmed. Word on the Street is that El Camino is Closing September 15th in Bloomingdale