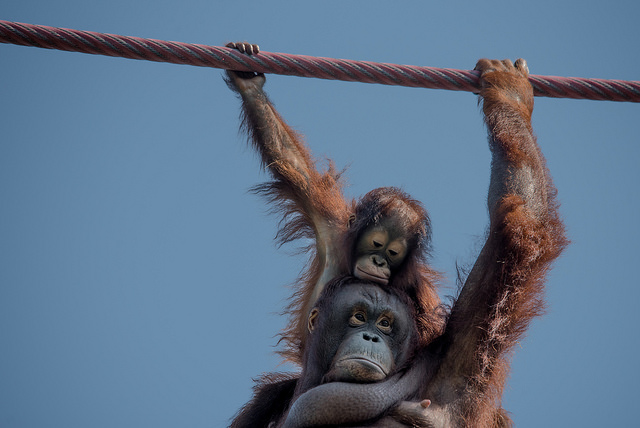 “The Smithsonian’s National Zoo’s charismatic Bornean orangutan infant, Redd, will celebrate his second birthday Sept. 12! Since our last update in February, he has hit some major milestones. He has even started traveling sections of the O-Line independently from time to time. Get the latest scoop on this playful primate from animal keeper Erin Stromberg:

Redd is still a rambunctious toddler! He is always exploring his habitat, investigating new toys or other enrichment items and, in general, spending the majority of his day playing with his mom, Batang.

That pair has a very strong bond. But, as he gets older and becomes more independent, he also seems to be a bit more defiant! When he is in a mood, Batang will pick him up by the leg and carry him away. Now that he has a full set of teeth, however, his play biting seems to try her nerves at times. Perhaps that is why Batang has been more lenient in letting Redd spend time with Bonnie, Iris and Lucy. When Batang is comfortable, she will let Redd climb all over them.”

Read the rest of the report here.

Read more →
More Stories
Peet’s Coffee Looking ready to roll in Navy Yard and Barre3 not too far behind eitherReport: “D.C. restaurants where members of Congress spent most from their leadership PACs”