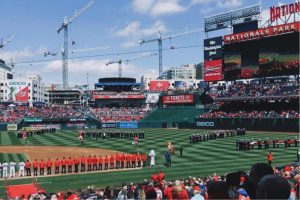 For over 10 years, the Washington Nationals have called Navy Yard (or Capitol Riverfront) their home.

During this time, the neighborhood has seen a resurgence of housing and commerce replacing what was at times considered DC’s industrial backyard.

While Nationals Stadium has been a key cornerstone of this success, such a rapid change could not have happened without a concerted effort by city officials, developers and local residents. 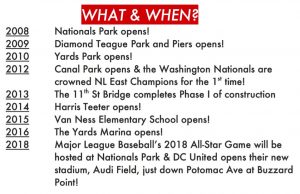 The Capitol Riverfront BID sees the area becoming the, “next-generation neighborhood for business, recreation and city life.” So much so, that Mayor Bowser has even pitched it to Amazon for their future HQ2 site.

With so much development, we thought we’d take a look at the numbers from the perspective of a future homeowner, renter or investor that has been wondering if the Navy Yard is right for them. 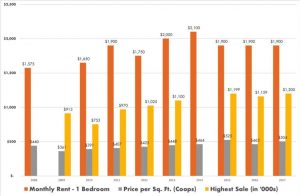 In 2008 Navy Yard had only 18 transactions recorded in MRIS (the Multiple Listing Server for Realtors) versus 71 transactions in 2017; a 394% increase in volume, which is mostly a statement of available units to market.

Overall, had you purchased a coop you only would have seen a 1.4% increase annually since 2008, but the townhouse values have increased by about 3.4% annually. Rental rates have remained fairly steady since 2013 in contrast to other parts of the city where they have been on the decline.

Since Navy Yard has experienced such a sustained and rapid transformation since the opening of Nats Park, we’re just chomping at the bit to see how Audi Field will continue the trend towards Buzzard Point!

Check out these cool sliders that show how the neighborhood has changed visually: http://www.jdland.com/dc/slidepics.cfm