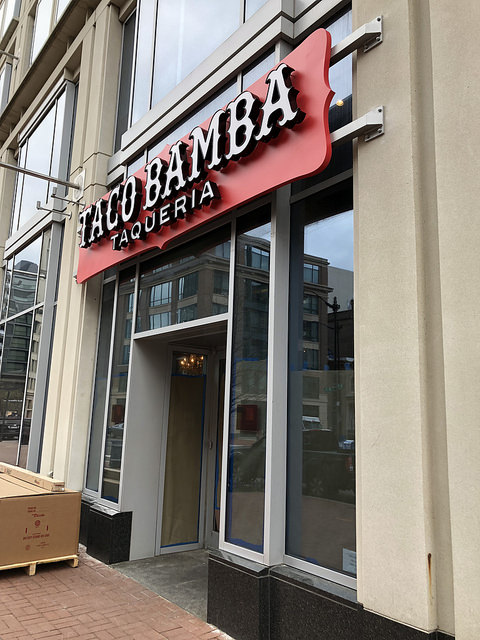 “Chef Victor Albisu announces the opening of Taco Bamba’s first D.C. location on Friday, April 6. After a quick renovation, his Taco Bamba lunch counter at 777 I (EYE) St. NW will re-open as a permanent location in Chinatown, serving breakfast, lunch and dinner seven days a week, including a full-service bar program. A fifth Taco Bamba location (and fourth in Northern Virginia) is set to open in University Mall in Fairfax, Va. this fall.

“The response to Taco Bamba’s lunch-only run in Chinatown was better than I had ever expected,” Albisu said, “Because we create a new menu for every location, I feel like Taco Bamba just keeps improving. My team of chefs, managers and bartenders went all out to deliver a menu and experience that meets the energy in Chinatown. And University Mall is giving us a chance to try some cool new tacos. The ‘dirty’ tacos that will be exclusive to that location are my new favorite thing.”

The menu at Taco Bamba Chinatown has been bolstered with The Royale with Cheese, a burger patty seared on the griddle, topped with Chihuahua cheese, flipped into a flour tortilla and topped with lettuce and a thousand island dressing made with mezcal. The Chivito Torta carries on the spirit of Del Campo, offering a version of the restaurant’s infamous Argentine sandwich to tide chivito lovers over till the restaurant returns in a new location. A chile relleno stuffed with suadero-style house-smoked brisket is topped with Taco Bamba’s version of classic nacho cheese.

sees longtime beverage director Amin Seddiq and service director Michael Iglesias collaborating on a drinks list that is sure to make Taco Bamba an under-the-radar entrant on the list of best bars in Chinatown. An expansive margarita selection includes the signature Margarita Bambera on draft, a mezcal margarita, a take with fire-roasted pineapple and a rotating margarita featuring seasonal ingredients sourced directly from the Penn Quarter farmers market. Other cocktail highlights include a daiquiri made with Oaxacan rum, a michelada enriched with grilled tomatoes and chilis and an old fashioned that mixes Vago Elote mezcal with huitlacoche honey and Oaxacan chocolate mole bitters.

Local design firm Swatchroom is behind the look of the newly permanent Taco Bamba, as well as Poca Madre, the upscale modern Mexican restaurant taking over the space’s back room and patio. Taco Bamba Chinatown’s design will echo the look of the Virginia locations with raw materials, like sealed plywood and corrugated metal, punctuated with bold artwork and vibrant red accents. Decorative elements include a pair of tongue-in-cheek posters, one a mock campaign ad and the other detailing a lucha libre wrestling move, while a mural over the bar depicts a hand triumphantly raising a taco with a D.C. flag tattoo on its inner wrist.

At University Mall, located across the street from the entrance to George Mason University in Fairfax City, Taco Bamba will present its beloved list of traditional and chef-driven tacos with a new twist. Under the Taco Bamba Vamos name, any of the traditional fillings can be ordered as a taco, tostada, or torta. Tacos can also be ordered “dirty,” which adds a topping of cheese and sweet chili sauce, seared together with meat on the plancha, and served in a flour tortilla. The new menu will be the most customizable offered at any of the Taco Bamba locations.

The 1,300-square-foot space will be open for breakfast, lunch and dinner, and offer a limited bar with beer and margaritas. Taco Bamba Vamos, like all Taco Bamba locations, will be staffed by a top-notch culinary team hand-selected by Albisu and led by Taco Bamba chef de cuisine Tom Hall.

Grupo7 is behind the look of the space, which updates the red, black, grey and natural wood Taco Bamba design palette. It is set to open in late summer 2018.

“George Mason University is my alma mater,” said Albisu. “I’m so excited to put the next Taco Bamba in University Mall across from campus. Some of the new tacos will be named after my old stomping grounds, and of course, we’ll build a custom menu for this location.”

“Dear PoPville, The cars on the left are legally parked in back-in spots per the sidewalk signs but directly across the bike lane are new legal parallel parking spots. I…

Read more →
More Stories
“Later when I called my insurance company I was informed that he lied about the accident.”“Any word on the rumbling in Columbia heights/Petworth Last Night?”