Get our email!
Search
Pepco, weather 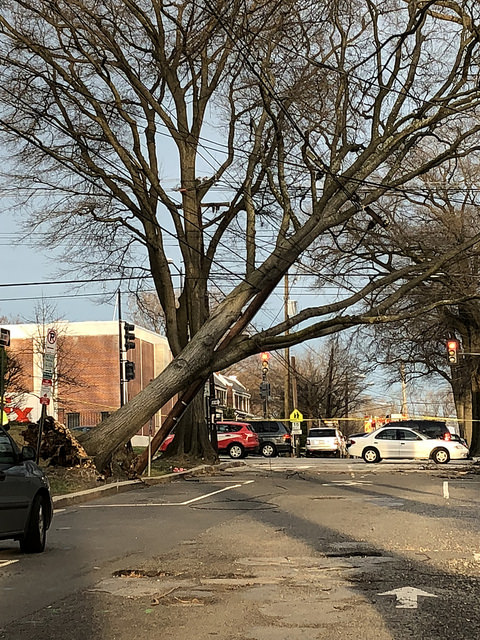 I thought you would like to see the tree that’s still being suspended by power lines on the corner of Hamilton St. NW and North Capitol. Power went out on the lower half of the block (closer to New Hampshire Ave) Friday sometime between 8-10am. A crane, Pepco and some tree experts showed up Saturday afternoon to inspect the situation, with the only progress being that they cut the power on the rest of the block. Tree guys and Pepco said they didn’t know what to do, and that the specific power line the tree landed on was an intersection of power down N. Capitol. They said they hope to have it fixed by Wednesday (!!!) but they’re not sure.

They also said if they cut the tree the wrong way, it may take out power in a 3 mile radius, and damage the house on the opposite side of the street, which isn’t shown in the photo. After idling there for 24 hours, everyone left and went home. As of this morning, no further movement on fixing the situation. We have a number of elderly neighbors on the block that we are becoming increasingly concerned about that have no heat. Here’s hoping they fix this soon.”

Read more →
More Stories
Anyone Know Why Pho Viet, the greatest Pho in the District of Columbia, was closed this weekend?Brookville Grocery Store reportedly closing for renovations soon and will reopen “under new management”