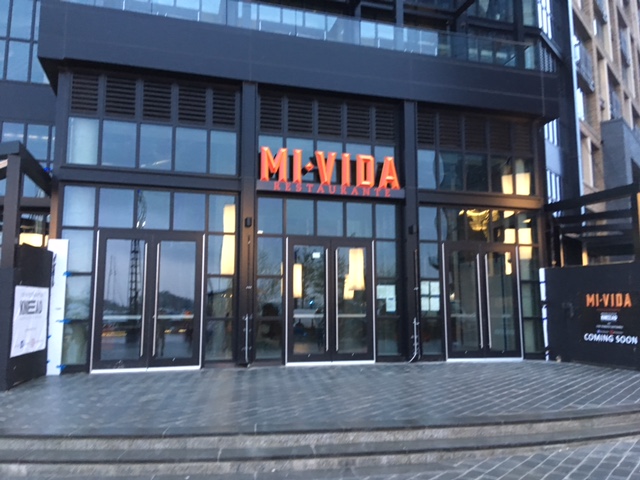 KNEAD Hospitality + Design founder, Jason Berry and Michael Reginbogin, in partnership with celebrated chef Roberto Santibañez (Chef/owner of NYC’s acclaimed Fonda restaurants) open Mi Vida today at 5pm in Washington, DC’s District Wharf, a new waterfront development located on the Southwest Waterfront overlooking the Potomac River. Santibañez, who created the menu for Mi Vida, is a native of Mexico City and one of the most respected authorities on Mexican Cuisine in the US.

Mi Vida offers a wide selection of Tequilas and Mezcals, in addition to specialty cocktails and margaritas. Signature drinks include the Mez-Skul with Fidencio Clásico Mezcal, raspberry, spicy tapioca pearls and dry curacao; La Pera with Cazadores Añejo, Pear Williams, Dolin Blanc and Canela; and La Frozen, with Sauza Blue Blanco, mango, ginger, passion fruit, agave, fresh-squeezed lime. An assortment if magaritas are available along with draft and bottled beer, and wines by the bottle and glass.

The stunning 11,000 square foot water-front restaurant, designed in collaboration with Studio //3877, boasts floor-to-ceiling windows with a panoramic view of the Potomac River. Mi Vida’s design incorporates The Wharf’s industrial aesthetic infused with contemporary and historic Mexican décor, with each of the restaurant’s floor representing a significant period in the country’s history. Adorning the center of the main dining room is a modern take on Mexico’s traditional “Arbol de la Vida,” or Tree of Life – an intricate 19 ft. clay sculpture adorned with colorful Oaxacan-inspired flowers. The restaurant will seat approximately 350 guests and will offer multiple dining rooms as well as waterfront patio seating, equipped with fire pits and a sun-shading, climate controlled pergola.”

From another press release:

“Milk Bar [opened Saturday morning], the award-winning bakery and dessert brand with a cult following, is set to open its second DC Location at The Wharf’s District Square by early next week. The new 721 square-foot store is located in the heart of The Wharf, just off of Maine and 9th, at 49 District Square SW. The store will offer a full menu complete with Milk Bar’s beloved naked cakes, cookies, cake truffles, pies, soft serve, shakes, savory breads, coffee and more.

Kaliwa, a Southeast Asian culinary journey from eminent Chef Cathal Armstrong of Restaurant Eve, will open in early March. The waterfront restaurant will be located at 751 Wharf Street SW. The menu will offer a new dining destination with distinct Filipino, Thai and Korean flavors bringing the best of Southeast Asian cuisine to DC’s Southwest waterfront.

Lupo Marino by Med Lahlou, the DC restaurateur known for his use of Italian and Mediterranean flavors, will open at 20 Pearl Street, The Wharf’s cobblestoned music and entertainment street, in early March. His current restaurants include Lupo Verde, Tunnicliff’s, Ulah Bistro and Station 4. Lupo Marino is a 2,000 square foot pizzeria with Italian street foods led by Executive Chef and Partner Matteo Venini and Manager and Partner Antonio Matarazzo.

Cantina Bambina by Nick Fontana, Bruce Gates, Henry Gandy and Rich Hemmer – the team behind DC’s original dock bar, Cantina Marina, as well as The Wharf’s new live music venue and diner, Pearl Street Warehouse – are reimagining the waterfront fun of Cantina Marina with Cantina Bambina. The snack and cocktail bar opening in mid-March is the only District Wharf eatery on a pier and includes a deck bar that boasts incredible waterfront views and makes patrons feel as though they are out on the water.”

Read more →
More Stories
“The brick narrowly missed her and the juvenile then picked up a rock.”12 Year Old Arrested for 6pm Armed Robbery in Cleveland Park