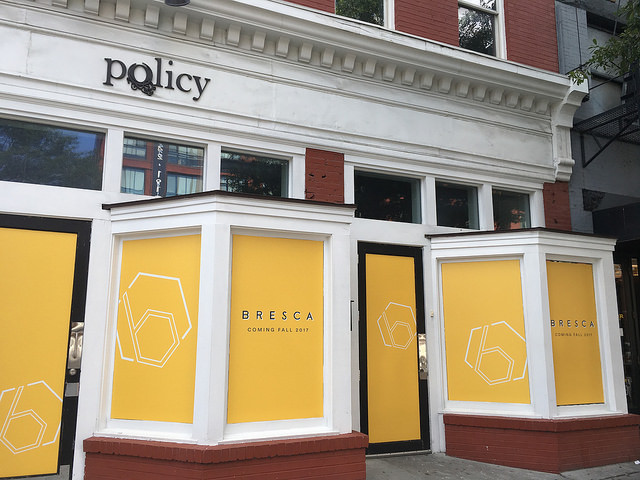 “Chef Ryan Ratino is proud to announce the opening of his first restaurant in Washington, D.C., Bresca, a concept born out of his passion for the bounties of earth and years of studying European cooking techniques.

Bresca is inspired by the European movement of “bistronomy”, (a combination of the words Bistro and Gastronomy). The trend is characterized by a more vibrant, experimental and informal approach to cooking than traditional French cuisine. It is a simple style with the focus being the food, its bold flavors and the feelings that these combinations evoke.

An Ohio native, Chef Ratino has cooked in some of the most lauded restaurants in the country.

Before embarking on this project, Ratino worked as executive chef of Ripple, an acclaimed DC restaurant which gathered several great reviews under his leadership and landed him a nomination for a 2017 RAMMY award in the category of rising culinary star of the year. Prior to joining Ripple, Ratino spent several years in New York City where he was executive sous chef at the Michelin one-star restaurant Caviar Russe, which consequently earned three stars from The New York Times. His fast-track career also landed him several stage opportunities including Wylie Dufresne’s innovative, norm-challenging WD-50 as well as Dovetail NYC and minibar by José Andrés.

“I did not grow up making perogies with my grandmother. My family is a working-class family, so growing up our meals did not necessarily translate into good food. Then I went to culinary school, where I became fascinated with European techniques and the importance of sourcing the best products for the perfect meals. So, with Bresca, I want to marry these two experiences and create a concept that builds on this culinary past to create new traditions that everyone can enjoy,” said Ratino.

Guests will set the agenda of their evening by making the menu their own: an a la carte experience to do as they please. The evolving menu will showcase the best produce and ingredients at their prime in recipes that translate into culinary art. Guests will enjoy dishes like Sea Urchin Linguini, with a sauce composed of leavened yeast, aromatics, summer truffles and chili; Cured Ocean Trout, a two-stage course where ingredients are served in two preparations: one hot with a dashi broth made from the fish bones, and one cold with seasoned raw or slightly pickled vegetables. Ratino is also working on bringing some childhood favorites to the menu such as a Walleye dish, a fresh water fish he used to fish with his dad. Price range for dishes is between $6.00 to $51.00

Bresca, which in Spanish means honeycomb, pays homage to one of nature’s most ubiquitous shapes, the hexagon. From the biggest planets to the most microscopic organisms, the entire universe is composed of hexagonal galleries. The shape is a symbol of strength, efficiency, harmony and a bit of mystery – embodying this new restaurant concept.
About Bresca

Located at 1906 14th St, NW, Bresca is open for dinner Tuesday – Thursday and Sundays from 5:00 PM to 10:00 PM and Friday to Saturday from 5:00 PM to 11:00 PM. The restaurant celebrates the bounties of nature, creative flavor fusions and deepened dining experiences. Reservations for Bresca can be made by visiting www.brescadc.com”